I've started taking an interest in 2000AD characters recently. By and large Dredd, Johnny Alpha et al passed me by in the 1980s. For a long time though, I've been interested in Citadel's 2000AD figures, selectively repurposing them for use in Rogue Trader.

Some gaming buddies have suggested that I start taking a look at some of the comic strips, and I'm currently working my way through volume one of the Search/Destroy Agency Files, featuring none other than mutant bounty hunter, Johnny Alpha. Painting up Citadel's Strontium Dog figures is a nice refreshing linked mini-project. They are a discrete trio who give me a chance to play with brighter comic-book colour schemes. And there's the added bonus that I could in theory use them on the table in a game of Warlord's Strontium Dog.

I chose to paint all three based on classic colour schemes. I found Wulf the hardest- Google threw up images of Wulf with blonde hair and red, green suits and red, wooden-hafted hammers and metal. In the end, I sought some expert advice before settling on the bright orange-red suit with the camo-green accessories.

Johnny was a little simpler - every image I found had the same colour scheme of green bodysuit and yellow accessories. The appearance and format of the accessories seems to vary from image to image though, and I couldn't find a single piece of artwork that matched the Citadel sculpt. In retrospect I'd have liked to have given Johnny a darker green bodysuit, but he'll do! 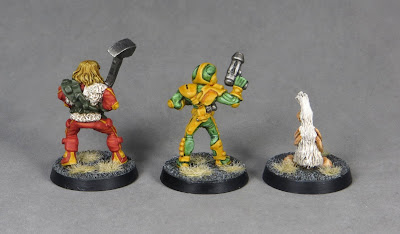 The Gronk was the simplest paint job of the three, with the eyes being the most tricky part - hopefully my placement of the pupils captures the terrified, pleading look that the Gronk usually has!