Saturday at Bring Out Your Lead 2018 (BOYL) continued after lunch with a rather chaotic game of Dracula's America (in Space). Dracula's America is Osprey's excellent fantasy Western game. But you can add in spacemen and laser guns if you wish!


The game proved to be very popular, ending up with 10 players fielding pretty much the full variety of Dracula's America forces. We had daemonic cultists rubbing shoulders with zombie-like ash waste nomads, facing off against space pirates and ratskins. Our game was based on the Stake a Claim scenario from the Dracula's America rulebook. But with a bit of text to help ground the setting:

Psych-Tech Prospector Stinky Pete has done a drone survey of Black Dust Gulch. His remote drones have identified three psych-nodes in the town, unwittingly stored in buildings or linked to other items. But Stinky Pete shoulda kept his mouth shut in Lucky Luke’s saloon last night. Dark alliances have been forged and folks are moving in to lay claim to his discoveries.


I wish I'd taken pics of each faction, because there were some bonkers and crazy figures on show, including Garth's reapeater rifle toting Magister, complete with tentacles in place of a beard, Paul's crazy space vampire and Graham's yellow-clad assassin! Instead you'll have to make do with some wide shots, and perhaps someone else will post some table-level shots.

I gave each player an individual objective, as well as splitting into two teams (The Tentative Alliance and the Uncomfortable Pact). The Alliance largely chased their own objectives, leaving the game objective (to occupy the three central buildings on the board) to the Pact. Come the end of the game, the Uncomfortable Pact had comfortably occupied all three buildings unopposed (with zombies, space cowboys and wildmen), whilst the Tentative Alliance had gone chasing their own objectives and were scattered across the table. 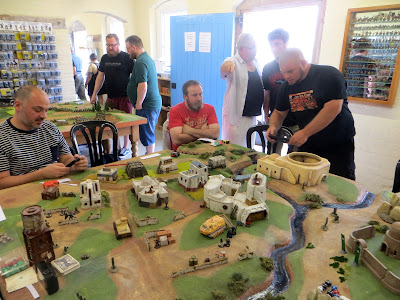 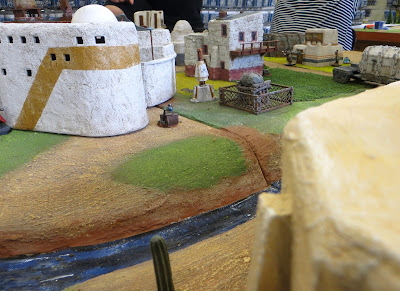 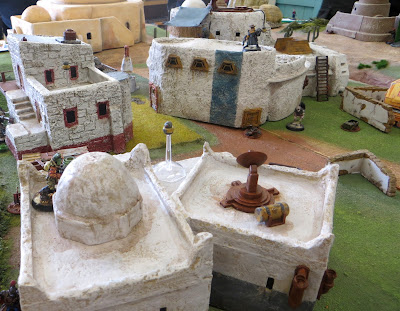 We did had to modify the rules quite a bit to manage the number of players. It was also a little chaotic at points, but I think everyone had fun! (Also antipixi was on the winning team. Again!).

The early evening slot on Saturday was my last opportunity to play a game at this year's BOYL. It's also the slot I've used to run a fast-paced, light game like the grox herding game from 2017. With the reintroduction of Venators (the formal hooded and masked bounty hunters) into Necromunda, I decided to run a Venator-themed game. Each player would bring a Venator or bounty hunter, and work their way through the civilians of the underhive to try and be the first to hit a bounty claimed of 100,000 creds. I borrowed some of the mechanics from Necromunda, stripped back to make things fast paced. I filled the table with enough potential perps so that every bounty hunter could in theory gain income every round, and I let them loose!

Each perp was either innocent (in which case the bounty hunter lost reputation) or had a dead/alive bounty on their head which was claimed when they were killed. Some of the perps fought back though... 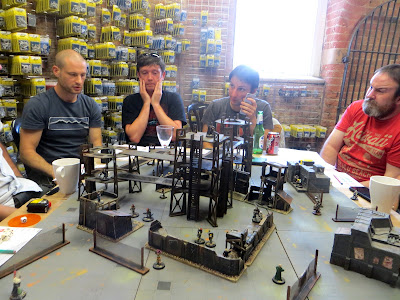 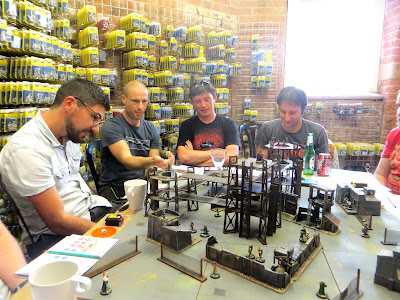 Unfortunately again, I failed to take decent pictures of this game - it's tricky when you're running a game I guess! It was a lot of fun seeing the bounty hunters' reactions as their Venator took down yet another innocent victim, or indeed when they targeted a perp who proved a little more dangerous than the norm!

I wasn't able to make the Sunday this year, but I hear it was another fantastic day. Foundry are great hosts, and really do go out of their way to make it an incredible event each year. And of course my buddy Garth does a superb job organising the event, the table bookings and generally making order out of the chaos!

If you haven't been to BOYL before, I really do urge you to think about coming in 2019!