The House of Bergat - Painted Scratchbuild 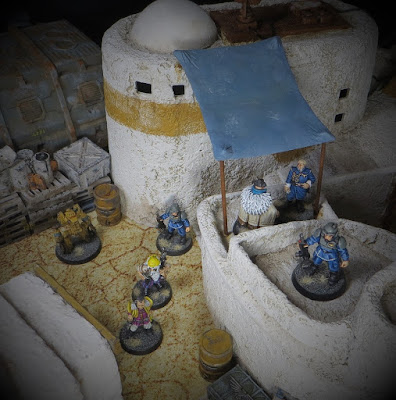 In my last blogpost, I shared the unpainted pics of my scratchbuilt large house, intended to sit alongside my other Helsreach-esque buildings. I kept on referring to it as a palace during the build and subsequently, but it's clearly anything but. I suspect it's more likely to be the abode of a relatively wealthy merchant - hence it is now the House of Bergat. 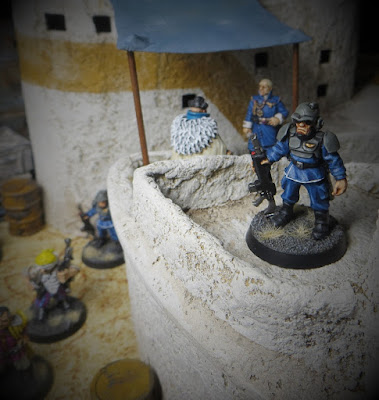 I also neglected to mention that the push to actually make the building, came from Asslessman over at Leadplague. We challenged each other to build some terrain at the same time - hopefully he's planning to show his finished item(s) off presently.

The House of Bergat is typical of a wealthy merchant's home, comprising living and entertaining spaces, private rooms and an integral storeroom. While not wholly fortified, the rear of the house can be isolated from the public spaces at the front, and guards outside doors and on terraces are a visible deterrent.


I painted the new building in pretty much the same fashion as the previous adobe buildings from various other sources - a basecoat of a sandy brown, drybrushed with an off-white (on this occasion, left over household emulsion). With the large space on the tall pill-shaped building, I decided to add a strong splash of colour with the ochre wall stripe. I wish I hadn't painted the door surrounds that orange though...I might go back and repaint them at some point. All the doors and window frames got hit with washes and the good old blister foam, while the white adobe had some washes to represent the dirt and grime.

There are some elements that were pretty tricky to paint - the interior of the courtyard in particular, but by and large the House of Bergat turned out OK I think (especially when I think what I started with!). 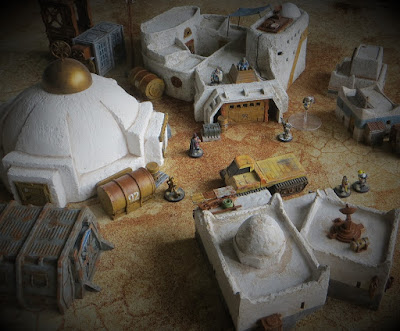 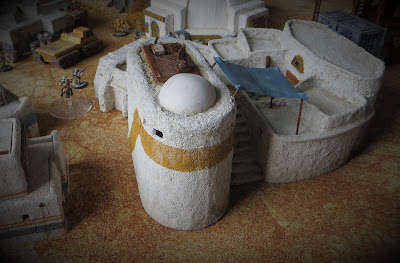 I just need to start thinking about the next building I guess?!
Posted by axiom at 15:57