When a mate pops round to your house and drops off a selection of wargames terrain because "it might fit with your Helsreach buildings", it would be rude not to take them up on the offer. What was kindly donated to me a week or so ago was a selection of dusty old resin Kryomek domes (still produced by Scotia Grendel), and a funky little plaster building. 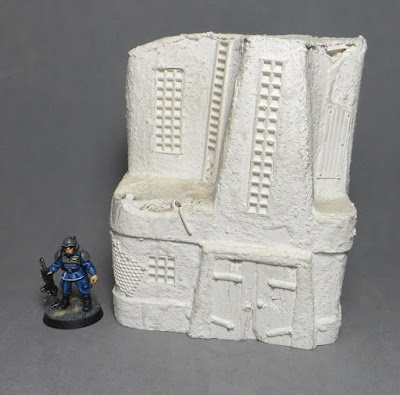 The plaster building in question is an oddity. It has a ground floor that looks pretty decently scaled to 28mm. It has upper floors that look more like a 15mm residential tower block - check out the ladder:

If the whole building is intended to be 28mm, people can't fit in the top section and that ladder is tiny. If the whole building is 15mm, then those doors are massive. I have no idea what the manufacturer is, so can't do any research on the model. To rationalise everything, I decided that the building is some kind of power plant, and the upper section is a kind of cooling system. This means that the long, tall windows are actually vents, and everything nearly makes sense. Apart from the teeny, tiny ladder that is!

Notwithstanding a scale, the building is a paradox of sculpting quality too. The wooden doors are brilliantly realised - full of wood grain and splintered details. In contrast, some of the rendered areas have big ugly blobs and drips, where they have been faithfully reproduced from the master model.

As this will be a filler building, I didn't spend too much time on it - no more than 2 hours start to finish. 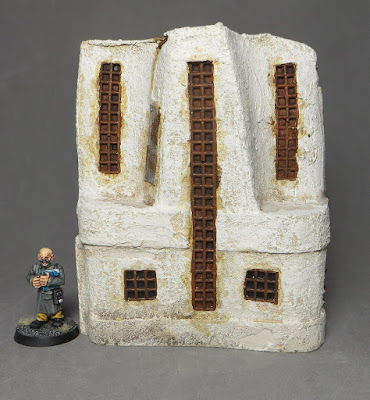 I'd be interested to hear any information about the producer of the building. It's got a nice, quirky shape and I wouldn't be opposed to adding more similar buildings to the streets of Helsreach. 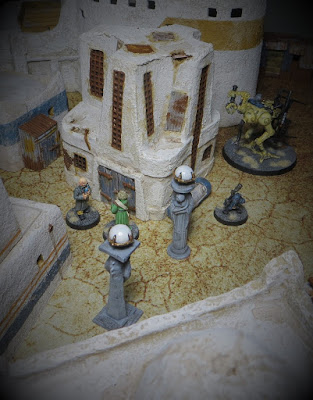 Earlier on today, I was none the wiser about the source of this fine building. Thanks to David Wood of Dear Tony Blair who pointed me to the short-lived Grenadier Models terrain series, I now know exactly what it is. You can check out some names and codes over at the Lost Minis Wiki, but frustratingly there aren't pictures there. David came to my rescue once again with some photos of the relevant pages from the Grenadier Eurocatalogue: 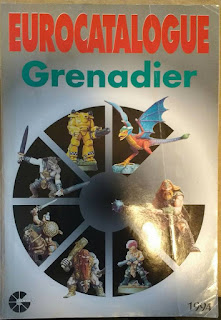 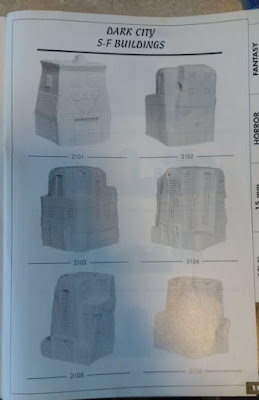 My building is the Garibaldi Block from the Dark City sci-fi buildings line (bottom right). That Trooper Precinct House (top left) looks rather nice as well.

There was a second sci-fi range, Frontier World. Some of those look pretty interesting too. 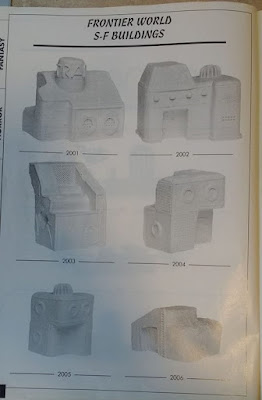 The buildings seem to be abstract representations of buildings, rather than actual scale models - they don't really appear to be logical in terms of scale or shape. But they're fun nonetheless.

Thanks very much for taking the time to pin down an ID David!