Choose Your Own Adventurers #10: Rico "Snakey" Vitovitch, Pilot for Hire

Last time on the Choose Your Own Adventurers project, cheetor presented us with another golden-clad 1980s musikkie lookalike. My latest contribution is a rather concerned looking pilot (named Lorgar in the catalogue pages). 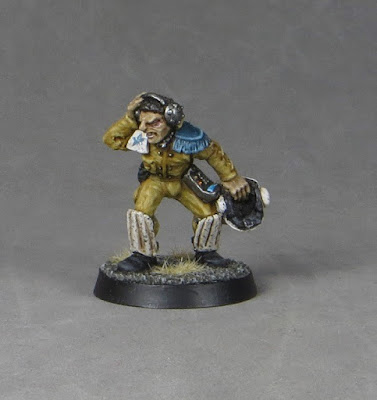 Rico "Snakey" Vitovitch was once a rising star in the Imperial Fleet's 'Maximal Blaster' fighter ace programme. However, a propensity for heavy drinking sessions and a lack of discipline meant Vitovitch was slung off the programme. Vitovitch has found himself as the retained pilot on Inquisitor Clousseau's crew. Clousseau can forgive the insolence and massive hangovers as long as Vitovitch continues to pilot air or spacecraft as required, using the innate flying skills that were once coveted by the Imperial Fleet.

The pilot is a funny old sculpt. I can't work out if he's listening to comms, ducking under a rotor or engine, or whether he has a stinking headache. Possibly all three. His outfit is equally bizarre - is the epaulette military, or from an old commercial shipping uniform? Why is he wearing cricket pads? Is the mobile phone on his belt the companion to the one on the psyker? 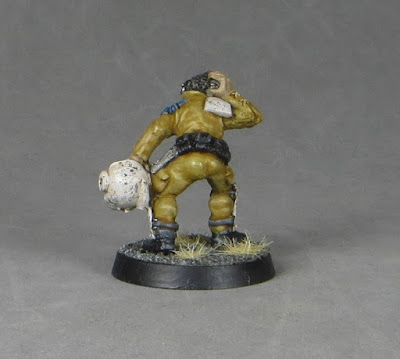 I painted Vitovitch in the same colour palette as all of Clousseau's companions, with a nice tan flight suit and white armoured sections. He gets a touch of blue on his shoulders just to jazz things up a bit. I tried to go for a Hispanic tone to his skin too. Not sure it's that obvious though!


Watch out for Adventurer #11 from Curis over at Ninjabread sometime soon!
Posted by axiom at 12:10