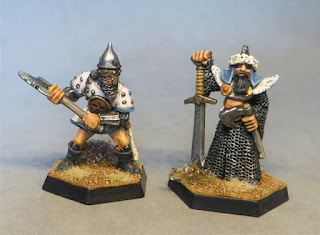 I believe Thorkor is a pre-slotta Citadel Chaos Warrior (although I was unable to ID him from the catalogues). With his conical helmet, ventail and studded tunic, I figured he was a good stylistic match for the Pan Tangians. 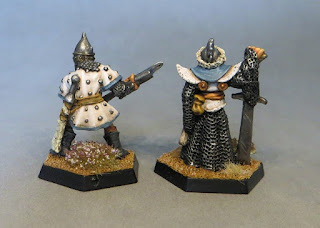 Carkan Amit is an unmodified Citadel Pan Tang figure - the officer from the 'Eternal Champion Personalities' range. I suspect he was sculpted by Jes Goodwin, as most of the personalities were. I decided to paint his plate armour white to add some contrast to the paint scheme. It also served to identify him as the senior officer.


In game terms, Thorkor will be used as an infantryman, while Carkan Amit will be a treasure hunter (at least initially!). Just one further archer to go with these guys, and my Pan Tang warband will be complete.
Posted by axiom at 16:03