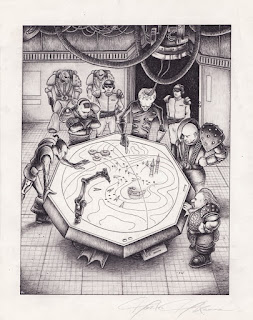 The Cadians at Ease were the right pose, but their tiny, modern helmets lacked the look I wanted. So out came the razor saw and a pair of Mark Copplestone Rogue Trader Imperial Guardsmen, and the change was made.
Armsmen Priestman and Stilley have served in the Imperial Navy for several decades, working their way up through the Rating ranks. Currently posted to the command of Commodore Chance, they are personal aides to Lieutenant Pender. Their impassive faces present an intimidating deterrent to any chancer looking to get one over Lieutenant Pender, and they are more than happy to look the other way during the Lieutenant's 'under the counter' dealings. As long as they get their cut, that is.
﻿ 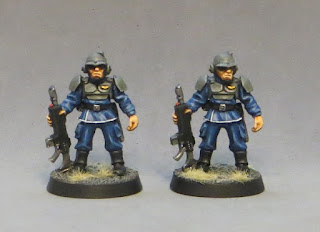 Priestman and Stilley got the same colour scheme as their officers, with the addition of the slate grey body armour. I chose grey as a nod to the traditional Imperial Army uniform from Rogue Trader. 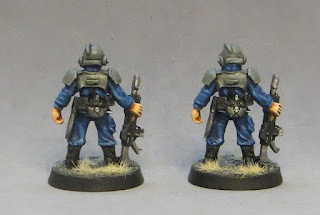 The sculpts are pretty rough in places - I guess largely due to the fact that the figure was originally sculpted as a concept piece for the plastic Cadians, before being pressed into service as a limited edition release.
﻿﻿﻿﻿﻿﻿﻿﻿﻿﻿﻿﻿﻿﻿﻿﻿﻿