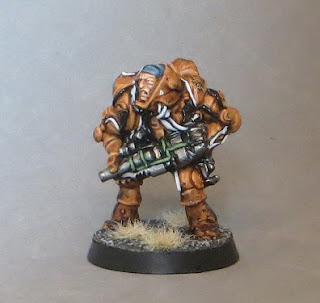 Unlike Asslessman's deliberately pure and shiny looking Paladin, I wanted my interpretation of the archetype to be gritty and worn - a veteran of countless engagements. I therefore used plenty of washes to grime up his armour, before adding paint chips and exposed metal from the heavy wear his armour has been getting.
﻿ 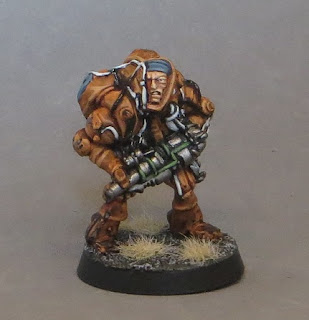 Because the sculpt is somewhat over detailed with all the cabling and armour plates, I kept the colour scheme very simple with the orange and black and white cables. I originally painted all the cables white, but he started to look like a clownfish, so I pared it back a little.
﻿ 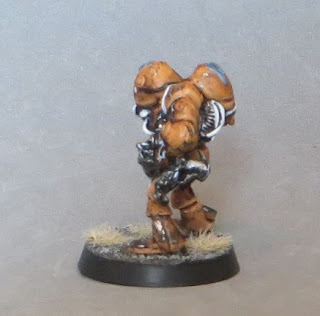 The figure has a rather unusual 'P' and 'A' sported on his backpack. I assume these were originally meant to stand for Power Armour, but I've decided they will signify the order which Rossal is part of.
﻿ 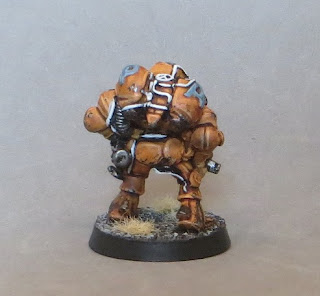 I'll confess from the outset, that I originally planned to use a different model for my Paladin, but the other figure didn't really fit the vibe that the other members of the party had. I adapted the figure from the original LE10 Power Armoured Marine by cutting out the helmet visor and adding in a section from a Catachan Imperial Guardman (a task that was much more fiddly than I suspected it would originally be). I resculpted the helmet around the face to try and imitate the original helmet. I didn't quite nail the angles, but it looks OK I guess. The only other change to the figure was the removal of the combat blade on the gun, which I think actually improves the overall look of the weapon.
I must confess, I've enjoyed the process of making these figures immensely. I have the start of a nice band of mercenaries or a rogue trader and his retinue I can use in 40k or Inquisimunda. And of course, I hope to use them in an actual Rogue Quest game once there's a ruleset nailed down! I've also made models for a Fighter and a Ranger - both of which I plan to paint up early next year.
But for now, I'll leave you with a final shot of my adventuring party. I wonder what they'll encounter round the next corner...?
﻿ 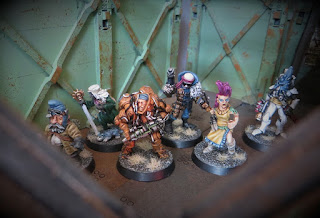