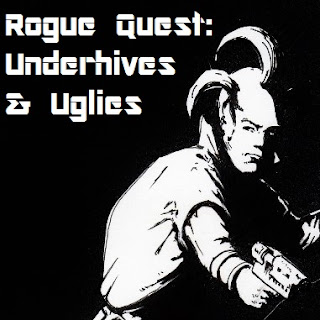 I've gone on record as saying that the Astropath archetype is my favourite element from the Warhammer 40,000 universe - the whole concept of blind psykers, holding the Imperium together rather presses my buttons. If you're a long time reader of the blog, it's probably apparent that I do like Astropaths - I've painted a few to date!

It was therefore inconceivable to me that I should build my Rogue Quest party without its own Astropath. Astropaths share some similarities to Clerics (monastic clothing, staffs topped with the icons of their faith/order), so it followed suit that my Astropath would represent the Cleric archetype.

Mama Gijón became an Astropath as a young woman. Her particular skill lies in the comprehension and sifting of layers of meaning, often hidden in complex astropathic communications. Now, as a bent old woman, Mama Gijón finds herself accompanying strangers on a quest through strange places. Her homeworld has been destroyed, yet her exotic blue-furred pet, Beyni provides a comforting reminder of home. 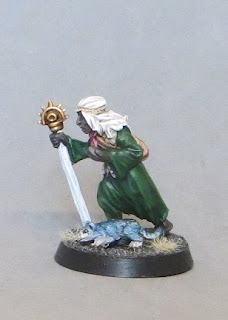 "The Prime Astropath of Stalinvast was a small, thin, dark-skinned woman. And she was old, antique. Deep lines grooved her prune of a face. Her hair which shone so brightly red, must really be purest white...Glowing eyes opened. Sharp small claws flexed. She toyed with an animal, which must be her companion. The creature looked both voluptuous and savage. Would it defend its mistress fiercely? 'What is that?' whispered Jaq. 'It's called a cat,' Meh'Lindi told him." (Draco, Ian Watson) 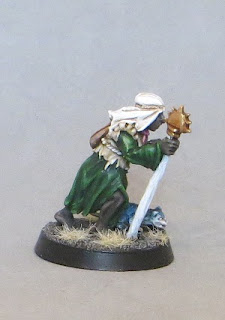 I converted Mama Gijón from a medieval peasant. I forget the original range, but the figure is now available through Warlord Games as part of their Pike & Shotte 'Market Day' set. The conversion was a pretty light touch - I just added the staff topper (made from a cut-down piece from the 54mm Inquisitor range and a sculpted eye). The tattered robes, bare feet and other details seemed to fit nicely unaltered.

Mama Gijón also gained a little pet cat. The cat is a modified version of Friskers, the small winged cat John Pickford sculpted for me last year. I clipped away the wings and resculpted the back to give me a flightless cat! In a nice element of parallel thinking, Asslessman has used the unaltered Friskers model for one of the animal forms of his Druidic skin-changer for his Rogue Quest figure from last week. 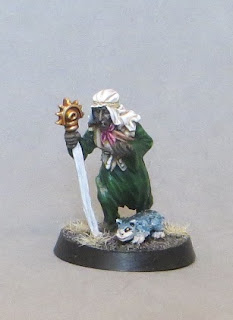 I stuck to the traditional Adeptus Astra Telepathica green for her robes, complemented by the tan, white and gold I'd used on my other Astropaths. Beyni got treated to the blue spot colour, hopefully linking the model to the rest of the adventuring party (with the added bonus of reinforcing the sci-fi nature of the beast!).

I must confess though, the model was a real pain to paint, with the staff getting in the way of the details on her front, and less pronounced details than I am used to. She's even more difficult to photograph, being quite a flat figure. Oh well, I think she mixes fairly nicely with her companions nonetheless!

So, it's one final RQ model before the end of the year to complete the planned sextet, and then my party is ready to go and do some adventuring!