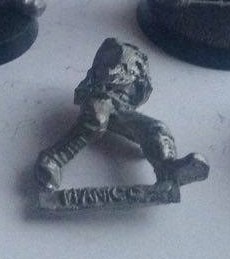 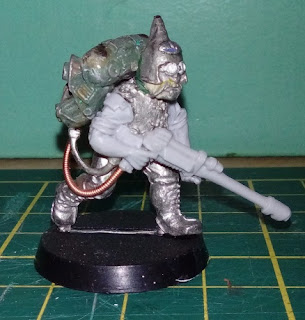 At the back of my mind, I wanted to include the figure as a fighter in my Rogue Quest party, so I decided to make him laden down with gear - just like any self-respecting adventurer would be.
﻿ 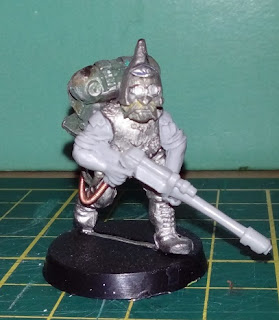 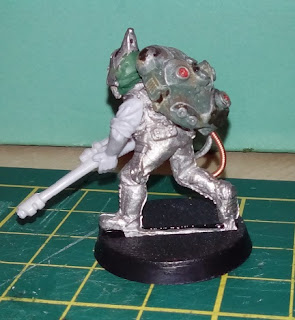 I finished off a few details, added a cable or two, and repaired any damage with greenstuff, and he was good to go.
When the time came to paint the figure, I wanted him to fit visually with the Rogue Quest warband to date, so he got a blue tunic and yellow-brown trousers to evoke some of the colours used on the other models.
﻿ 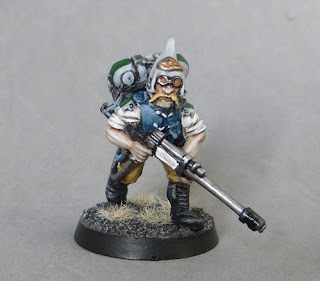 I also wanted to make a feature of the eye symbol on his helmet. The obvious link was that he was the personal guard for Mama Gijón, the party's cleric/astropath. If you've read the Matthew Farrer Black Library novel 'Blind', you'll be familiar with Vitifers - personal guards to astropaths, who summarily execute them at any sign of daemonic possession. I decided my fighter was going to fulfil this role. 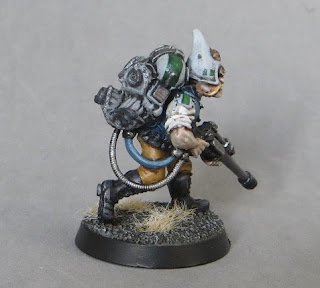 In order to link him with the astropathic role, I added some green and gold detailing on his armour and backpack, which hopefully ties him to Mama Gijón. 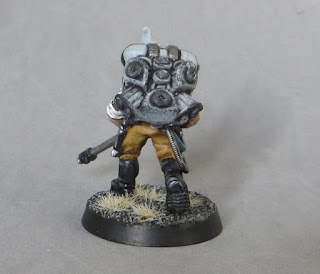 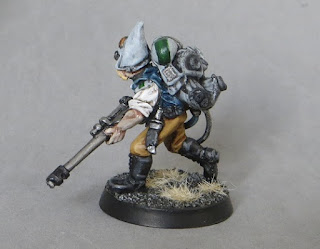 Vostro Goedes has been the personal guard and Vitifer-elect to Mama Gijón for 17 years. It was he who led her to safety ahead of the destruction of their homeworld. A Vitifer's role is to guard against any hint of daemonic possession. Goedes often wonders if, after nearly two decades of protecting his astropath, he would be able to pull the trigger should the frail psyker's mind break.


For a figure that was entirely created out of random bits, and without any clear final vision, I'm pretty happy with the results. The figure has very much informed the character, even if it was suggested that he looks like an Asterix the Gaul character in 40k!