Back at the end of October, a painting and modelling competition was launched over at the Father's Hall Facebook group (home to all things relating to genestealers and their romantic associations with the human race). Between now and the end of November, participants are being invited to make and paint a new genestealer hybrid. The rules of the competition are:
I've been slowly collecting enough genestealer hybrids to make a small force at some point in the future, and the competition seemed like good motivation to make and paint a hybrid in a test colour scheme for the future force. And then I read the rules again: "any generation, any race."
I thought, 'I wonder if I could make a ratling genestealer hybrid....?'
Holding that thought, I hit ebay and snaffled this cool little fella - a weird pre-slotta halfing oni demon (he later had his horns removed and a slotta-tag added, becoming an Oriental Halfling):
﻿ 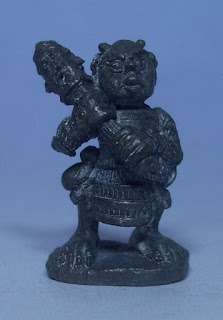 At first glance, you might think this guy is an unpromising basis for a genestealer hybrid, but he had some features which I figured would translate nicely: the odd eyes/eyebrows; the bare feet; the bald head; the nice pose; the interesting looking mace.
The conversion was quite extensive, completed over the course of about a week. First job was to remove the head and replace it further forward and down on the chest to give my little hybrid a more hunched look. I clipped away the back of the head, and then resculpted a smooth dome, before adding some distinctive hybrid creases and nose ridges.﻿ 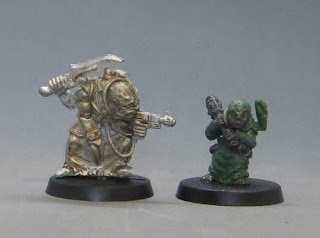 The claw arm was a greenstuff press-mould copy of one of the arms from one of the genestealer familiars, while the other arms got newly sculpted carapace plates, mimicking the design from the Jes Goodwin hybrids. 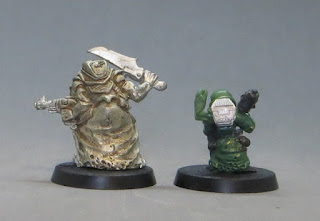 I clipped away the armoured skirt and sculpted a new tattered robe, then finally sculpted the distinctive high-collared hybrid armour, adding a small backpack (Denizen Miniatures 25mm sci-fi range) to complete the look.

After completing the conversion, I probably spent longer than I should have thinking about the paint scheme. Purple and blue is inextricably linked with genestealers, and coming up with a new interpretation on the scheme, without being wildly off-piste, is actually quite tricky.

In the end I settled on a dark skin done with purple washes, and a blue robe. White armour, sand coloured carapace and black claws completed the look. 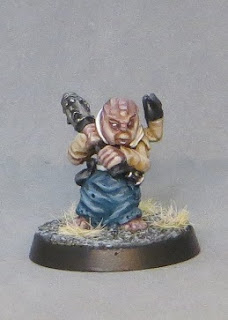 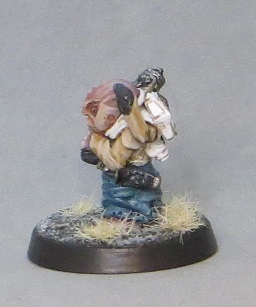 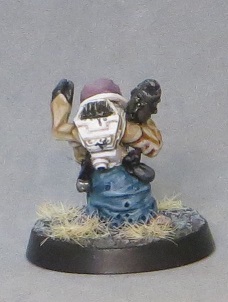 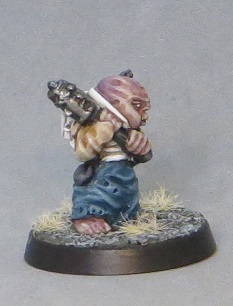 Ratling hybrids are incredibly rare. It is almost as it genestealers are aware of the sub-standard gene-stock and weak physical make-up of the abhumans, and shun them for reproduction as a result. Nevertheless, ratling hybrids do exist - they often act as messengers or spies for their covens. Sometimes they are included as part of a Patriarch's inner circle where they act as personal servants or even court jesters, where their frolicking and prat-falling can entertain and delight the coven.


I'm not certain if ratlings can technically become hybrids according to 40k lore, but as this little guy is so cute, I'm sure it can be overlooked!
﻿﻿﻿﻿﻿
Posted by axiom at 15:11