In the navy - Fleet officers of the Imperium

I find variety helps with keeping up the pace of painting figures. Sometimes this means pulling out some figures to paint for no rhyme or reason other than because I like them. And that's why I painted my most recent pair of figures - because I fancied it!

The Imperial Navy has long an integral part of the 40k universe, particularly relating to the ship-to-ship space battle games of Spacefleet and Battlefleet Gothic. Unfortunately, Imperial Navy figures have been sadly underrepresented in 28mm figure form, with the singular exception of the Officer of the Fleet from the Imperial Guard Regimental Advisors set.

My pair of officers will probably represent the Imperial Navy presence associated with a planetary starport - administrators rather than space-faring fighting men. 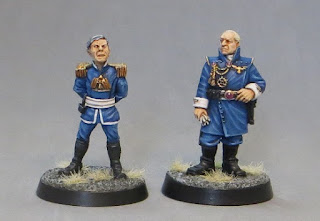 First up is my starport commander, Commodore Walmer Chance, using the Officer of the Fleet model. He's an arrogant man, from noble stock. He is also a keen political operator, with ambitions to increase naval presence in the sector by the creation of new orbital dockyards (and correspondingly, increase his political sway). 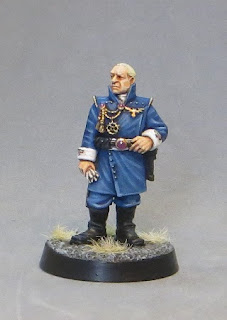 ﻿
I didn't deviate too much from the standard approach to painting naval officers - a blue uniform with white accents and plenty of gold braid and adornments. 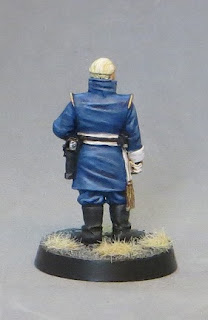 Commodore Chance's personal assistant is Lieutenant C.B.G 'Smokes' Pender , who also holds the administrative title of Port Warden - effectively overseeing the day-to-day operations of the starport. Universally disliked for his grey, humourless style and complete lack of empathy. Lieutenant Pender is nicknamed 'Smokes' by naval personnel for his habit of chain-smoking low-grade narc-sticks. If you speak to the right people in the right bars, you might hear far-fetched rumours that Lieutenant Pender is part of an Inquisitorial conspiracy to make deals with xenos civilisations to colonise Imperial worlds. Of course no sane person would believe such things... 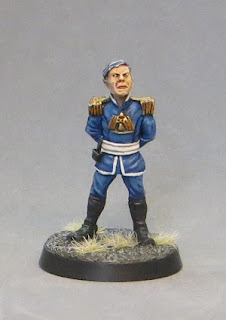 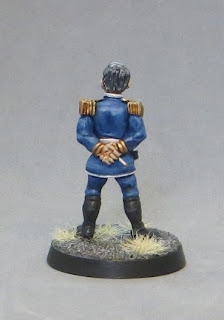 Lieutenant Pender is actually from the Black Tree Design Doctor Who range, representing The Marshall from the Tom Baker era. I painted him up in exactly the same way as Commodore Chance, and I think he works pretty nicely as an Imperial Fleet officer. I added the narc-stick from a small piece of thin wire because Asslessman made me!