I'm sure most of you reading this will be aware of Games Workshop's Necromunda and Inquisitor games. In a few weeks time I'll be starting an Inquisimunda campaign. Inquisimunda is a modification of the Necromunda rules to allow 28mm scale Inquisitor style warbands to be used. I plan to use a radical Ordo Malleus Inquisitorial warband, with my Inquisitor Hennel Dirske front and centre.
I already had several suitable henchmen painted, but after drawing up a provisional list, I discovered I needed two additional characters - an inquisitional acolyte with a plasma gun, and a recruit with an autogun.
Having no suitable figures with plasma guns, the acolyte called for a conversion. I had a root around my boxes and turned up an old Citadel hobgoblin with a missing axe head, and the plasma caliver from the new plastic Adeptus Mechanicus Skitarii. After some fiddling around, this was the result:﻿ 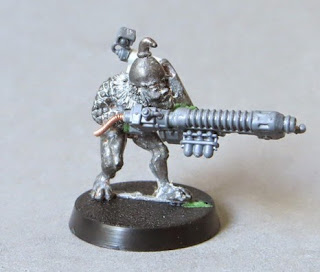 The backpack was made from a few different lengths of plastic rod, with the addition of some techy elements from the Skitarii kit, and a short length of Zinge Industries wrapped posable wire to the rear of the plasma caliver.
﻿ 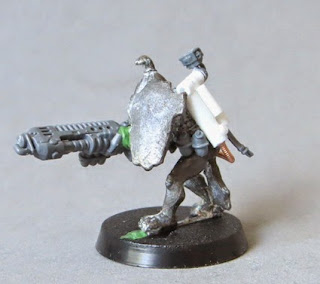 Just prior to painting, I decided that the spiked helmet wasn't really working, so I snipped off the spike and added a set of Victoria Miniatures goggles, which changes the look nicely.

My final alteration was after I'd pretty much finished the entire model. I decided I didn't want to freehand a symbol onto the shield and instead made a relief Inquisitorial symbol out of thin plasticard and a skull sliced from a Space Marine bolt pistol. 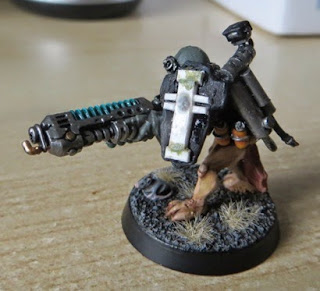 Acolyte Jun Lek is a twisted and deformed creature, with a hunch-back, club feet and an elongated face. Inquisitor Dirske has no qualms, regarding Jun Lek's loyalty to the Emperor however, and has entrusted him to be part of his inner circle. 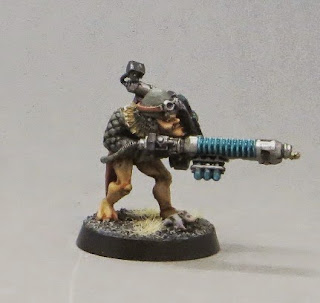 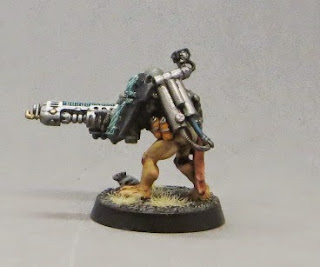 I attempted to give the Inquistional symbol a marble effect, copying the excellent notes by cheetor over at Sho3box (scroll down to the comments). Unfortunately the light reflected off the gloss varnish when I took the photo, but I can assure you the marble effect looks petty good in real life! 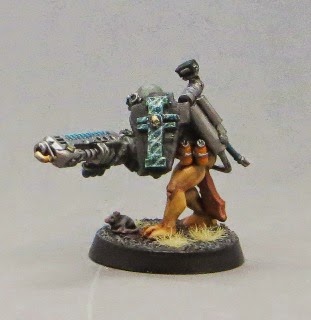 My second addition to the retinue, was a recruit armed with an autogun. I picked up this old Citadel 2000AD mutant a few weeks ago, and he was just asking to be included. I decided to play up the mutation and gave him greenish scaly skin and yellow eyes. In game terms I plan to give him a chameleonic skin mutation. 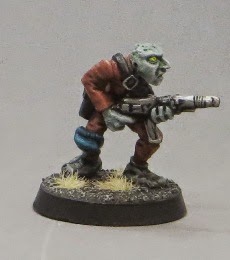 Skink received a very simple paint job - I was aiming for his outfit to be reminiscent of labourer or even prison overalls. 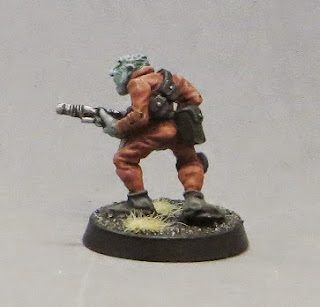 Whilst the going was good, I also managed to paint up this pair of tables / stalls below for my ammo trader from last week: 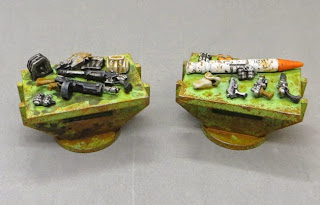 I've actually had these in planning for a long time. Cheetor had the laser-cut tables created as little momentoes for the Bring Out Your Lead 2014 event at Wargames Foundry. They were originally supplied with little castles and trees as mini wargames tables. Cheetor kindly supplied me with a few spares to use for this project.

I simply loaded the tabletops with a selection of guns and ammo from my bits box, then painted and weathered the tables in the same fashion as the barrels, also painted last week. I'll be using the tables as scatter terrain, and possibly with the ammo trader as an NPC in future games.