I've tried to maximise some hobby time over the past 6 days. The first opportunity was up in Glasgow where I was working for 3 days at the end of last week. As I was occupying the hotel all by my lonesome, I decided to make the most of it and get in some quality painting time. Two evenings work netted me the following:﻿ 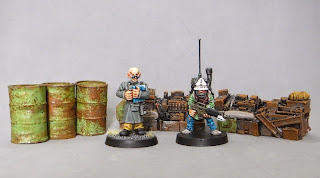 Not too shabby for a limited selection of paints and (towards the end of the evenings) some pretty poor light!

I'm in desperate need of some scatter terrain, so one of the tasks I had set myself was to paint up a few pieces - a trio of resin barrels (I'm not sure who made these) and a pair of resin junk piles / barricades from Ainsty Castings. Both were treated in similar fashion - I gave them a base coat (green for the barrels and a couple of the boxes, metal for the rest of the barricade). I then used a piece of blister pack foam to liberally dab on first brown then a light orange. The barrels got a very light flick of metal in a few areas, and I painted the rolled tarpaulin, sandbag and gas bottle on the barricades. Overally I'm pretty pleased with the results - minimal effort and a very acceptable effect.

Next up was the Scientist figure from Citadel's Talisman range. I kept his paint scheme very simple, using the same colours I'd used on Tech Priest Zon a few weeks back. 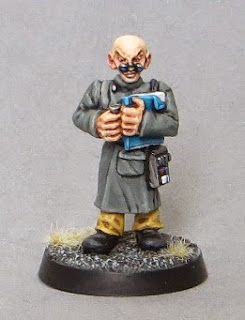 The only real addition is the bright blue of his folder. 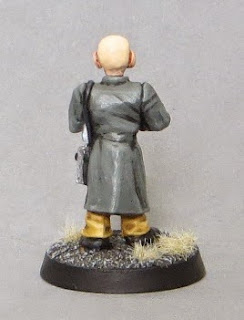 Side by side, the scientist and tech priest make a pretty good pair, although the scientist suffers from the exagerated head and hands, common to most of the Talisman figures. 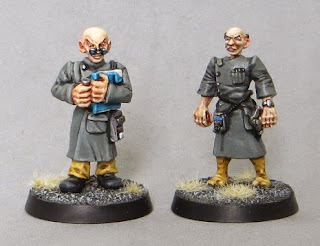 Finally, I painted up the model I'm contributing to the Oldhammer Legacy Warband 2015. The principle is that participants contribute and paint a figure, meeting a common theme. One of the contributors wins the lot at the end of the project. This year, the theme is Space Pirates in homage to the old Rogue Trader range. My contribution is converted from a fantasy half-orc with the addition of a back-pack, autogun and newly sculpted hands: 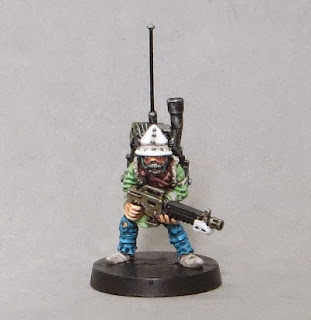 The bases are being left blank to allow the winner to texture as per their preference. 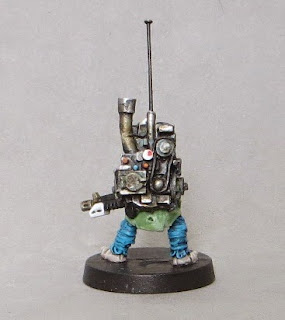 But that's not all I've painted over the last week! Last night I managed to break out the paints again, and on sheer whim I pulled out this guy: 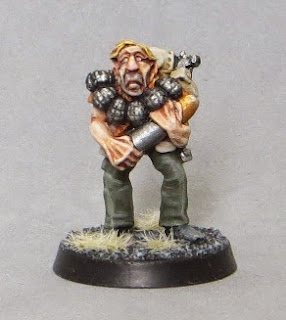 The figure is Jonk-r-ter from Citadel's relatively short-lived Paranoia range. Like the Talisman scientist above, he too has rather cartoony over-sized hands and head, but his facial expression is just a delight! I'll be using him as an ammo trader along with other civilians for the Rogue Trader setting. 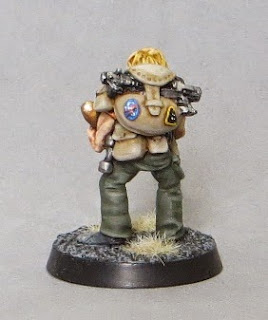 In due course he'll be getting a little table of wares to display too!
Posted by axiom at 11:27