﻿
Professor Barossus has been in the employ of House Ulanti for decades as a retained tutor to the noble sons and daughters of the House. The Professor is an exceptional scholar in ancient Terran history and advanced warp physics, however his primary role is to educate the wealthy and the privileged on mundane topics such as etiquette, Imperial Gothic dialects and trade and commerce.

Currently the Professor is responsible for finishing the education of Anamuria, the petulant Marcisa of House Ulanti. As her personal tutor, he is one of Anamuria's constant attendents, along with her personal bodyguard, Eduardo Murat. 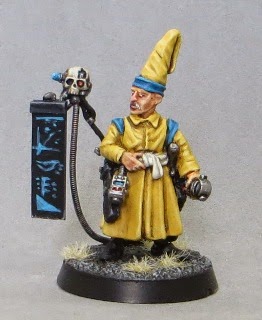 Professor Barossus began life as a 1985 Citadel C01 series Fighter. My initial conversion involved the removal of a bow from his left hand and the addition of a few tech pieces (left hand and hanging from his belt). 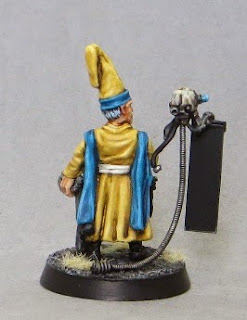 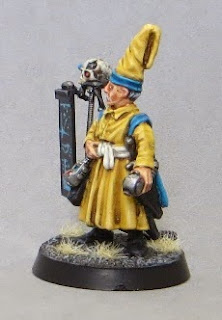 After finishing the painting, I decided that he wasn't rooted firmly enough in the Rogue Trader universe. He also didn't really scream 'tutor' at me. To rectify both of these issues I added the little servo-skull carrying the holo-board display.

Hopefully the addition helps reinforce the sci-fi nature of the figure AND the narrative. I can just imagine him displaying complex equations for the Marcisa to solve.


I think the three figures work pretty nicely together. The Professor and Eduardo have a visual link through their headgear, as well as the colours of their outfits. They also make a nice frame for the more delicate and paler Anamuria. 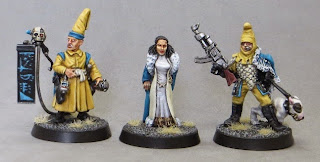 I'm certain House Ulanti will be a subject I'll revisit in the very near future!
Posted by axiom at 13:47