I can't believe it's been 2 months since I painted up my first Ash Wastes Nomad for my planned Confrontation / Necromunda gang. Various other bits and pieces have distracted me, but happily Nomad #2 saw some paint action last night. Here's the results:﻿ 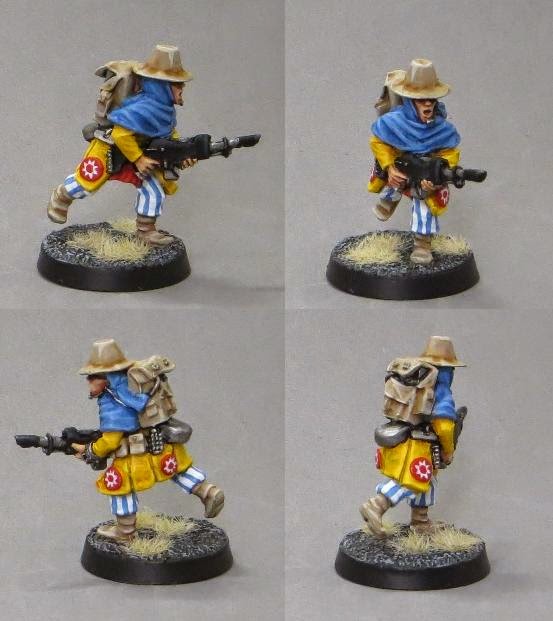 The Nomad has been quite extensively converted from the circa 1999 GW Last Chancers 'Brains' model. I sculpted him a new coat, headscarf and trouser bottoms, as well as reforming his canteen to match Nomad #1. His hat came from a Warlord Games sprue of hats, although I did do some remodelling to increase its girth.﻿

Like Nomad #1, I went for a bright colour scheme, using broadly the same palette, but mixing up the patterns and colour placement. Having taken the photos, I can see that the striped trousers look rather pyjama-like, and I probably need to do a final highlight on the headscarf.

I took inspiration from the Nomad Leader below (particularly on the little sunburst patterns on the glyph plates), bought from and painted by Michael Wright over on the Oldhammer Facebook group. I'm still debating whether or not to just touch up the Nomad Leader or to strip him and start afresh. 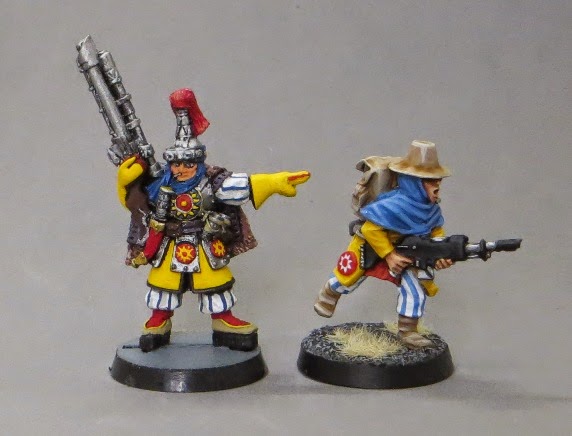 I've decided that my main goal between now and Christmas is to paint up another 3 Nomads so I have a small but usable gang ready to go. Watch this space!
Posted by axiom at 13:40