Guilder Yakob Pento has recruited yet another hired gun into his entourage - this time an Underhive Scummer by the name of Urst Mulmo. 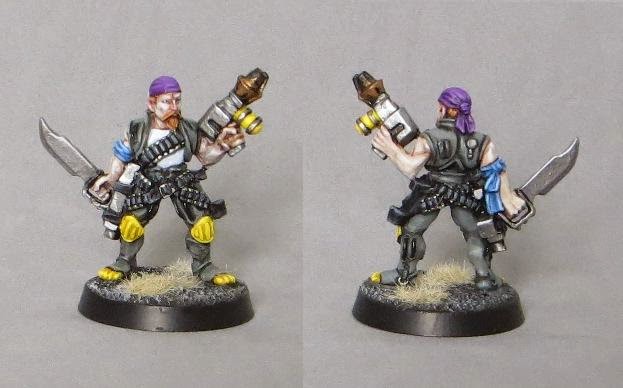 I've long considered this Necromunda Scum figure as a 'modern' figure...it amazes me that this sculpt is nearing 20 years old! Although a lot of the Necromunda range leaves my pretty cold (Eschers excepted), the Michael Perry Scummers are pretty nice (except perhaps the one with the bare torso).
I tried to get a different skin tone on the Scummer - a pale red head. I added a pale grey to the highlight mix and then lightly washed his ears and tip of his nose with a red wash. I think it works pretty well. I also reined in the bright colours for a second paintjob in a row, giving him a workman-like grey stillsuit. Yellow accents on the stillsuit and a purple bandana hopefully tie him in with the rest of the Trading Guild.