Vendors and Their Wares

If you've read this blog for a while, you're probably aware that I like a nice sci-fi civilian model. It's been a little while since I last painted any, but over the last couple of weeks I've been working on a project to paint up some nice new bits of scenery and set dressing. The first part of this project is a trio of vendors and their goods. I settled on a carpet seller, a tech merchant and a general food seller based on the models I had to hand.

I painted the trio in some nice colours that loosely tie them together as a set. I can't work out which I like best - the beautifully clean sculpting on the tech merchant (centre), or the characterful swagger of the Astropolis figure (left). 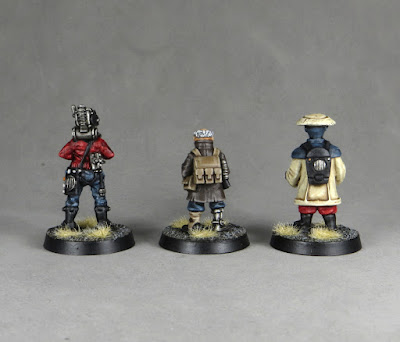 To give these merchants something to sell, I set about creating some little pieces of scatter terrain.
I made a selection of rugs and carpets for the carpet seller, aiming to try a couple of techniques. The rolled carpets were made from embroidery fabric that I soaked in watered down PVA glue before rolling. The flat carpets were carved from plastic sheet, and the hanging carpet was made from a thin piece of greenstuff. 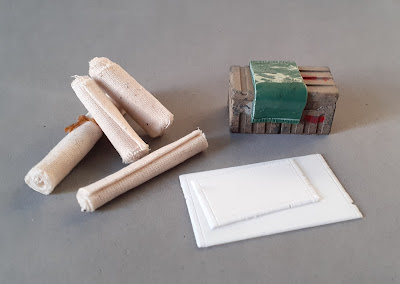 Overall, I think the greenstuff carpet was the least successful, but they're all pretty acceptable! 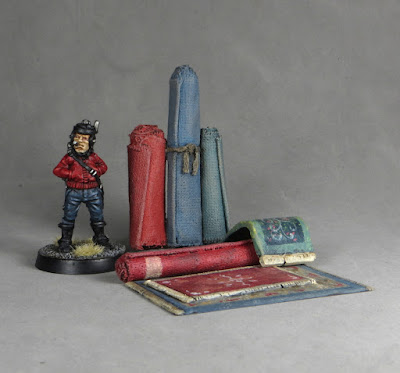 The tech merchant got a stall laden down with tech bits, all from my bits box. There are random parts from long lost minis as well as metal, resin and plastic accessories. The stall itself was made from some scraps of plastic sheet and some square plastic tubing. 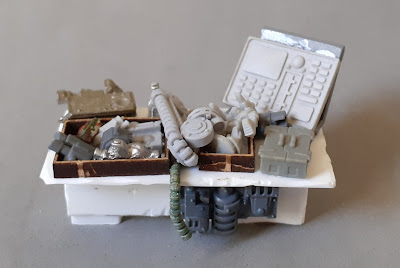 Everything got painted up as a little bit battered and rusty. Clearly his prized piece of stock is the carefully displayed control panel and screen! 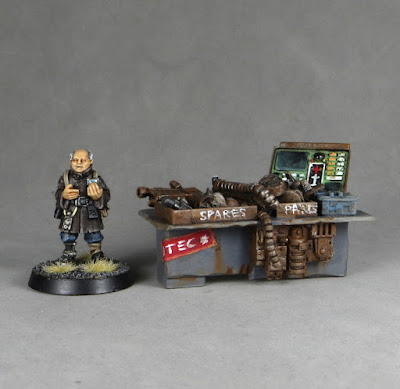 Finally I needed something for the food vendor to sell. He got a pair of Crooked Dice resin shelving units crammed with jars, bottles and packages. I did hack at the shelving with a knife to make it as beaten up as the rest of my terrain though! 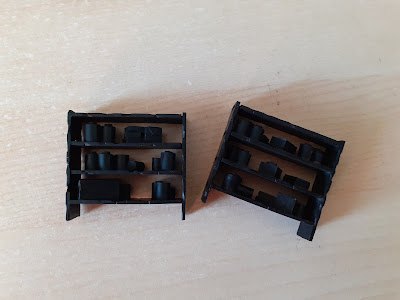 Some dirty packages and a little bit of variety in the colours on the shelves makes it look like a great place to stock up on supplies! 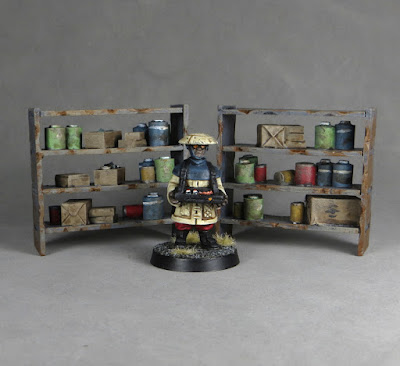 The second part of the project will follow later this week!
Posted by axiom at 14:51