The eagle-eyed of you might notice a new header for the blog. This is LONG overdue! This is actually the fifth banner that I've had since I started the blog in 2013. I orginally named the blog due to the idea that I had a magpie-type approach to hobbying - collecting and hoarding shiny stuff, whilst also flitting from one thing to the next!

Banner one was based on one of my Brat gang characters - who I named the Magpie Dandy of the Sutter Dukes. When I started the blog, I wanted a model to be shown in the header, but for lack of a suitably interesting model, I elected to show the silhouette of my then unpainted (and unnamed) Magpie Dandy. The silhouette is shown against an old notebook, and some uninspiring text thrown on to the image.

Not much has changed from the original banner, except a little bit of editing to sharpen up the image (I think I knocked the contrast levels up). The new font was Woodcuts from Copyfonts.com. I can't get it to work on my laptop any more!

Very short-lived - this was my first attempt at making the banner look like a woodcut. I didn't like it as it didn't really fit the subject matter of the blog.

The longest-lived of the banners, having headed up the blog since September 2015. This followed on from the design cues of banner 4 by attempting to look like a woodcut. Not very convincing really, but it does have more of a graphic feel. With nothing more than Photo editor and Paint to hand, I ran the Magpie Dandy's shadow through some filters and spliced it to the woodcut text.

Fast-forward to yesterday, when I had an hour or spare. I decided I was going to spend that hour doodling to see if I could draw something a little better for the blog. I wanted to have a magpie in the image, and I wanted to carry over the prominent feature of the previous 'logo' - the caryatid's wings. 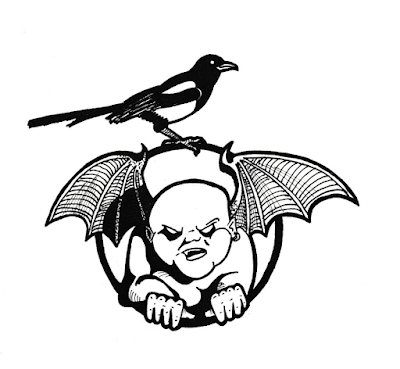 I was pretty pleased with the results, drawn with some nice fine line black pens and a black Sharpie for the block shadows. I asked for some feedback from some buddies, and promptly ignored the suggestions because I liked my version better (even though some suggestions were funnier than mine, and others came from actual graphic artists!).

I thought finding a new font was going to be challenging, but I found a nice and easy text generator with a range of futuristic fonts over at Font Meme. I selected the font I liked best (Deathstar), which just so happens to be a close family relative to the font used in the original Rogue Trader advert. I figured that was job done!

I guess all in all, this is probably not hugely interesting to anyone but me, but I'm very pleased with the new banner and ticking one well overdue task off the list. Hope you like it!