Pulling the Crew Together - A Rogue Trader in Stargrave

The best bit about Frostgrave was the way that it allowed players to delve into their collections, dust off old figures and breathe new life into them. Stargrave has that very same appeal for me, and whilst there are some lovely new figures I could use, it's also great to use the rules as a driver to form a new warband around existing figures. 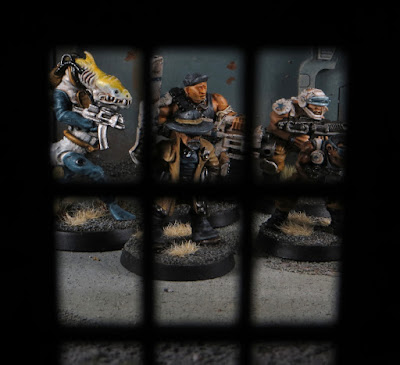 Over the last few blogposts, I've been pulling together a few additions to bulk out Inquisitor Clousseau's 5-strong group into a 10-strong playable Stargrave crew. I hadn't used Inquisitor Clousseau in a game since I painted him, but now there are no excuses!

My crew build is as follows:

The navigator-as-grenadier probably needs a little bit of explaining away, but I figure that the effects of grenades probably works quite nicely as a mechanism to represent a deadly blast from a third eye in the navigator's forehead!

I'm very much looking forward to a similar process with some other figures - it's a fun way to refresh and update, and get figures onto the table!