The Sensei as described in the Slaves to Darkness and Lost & the Damned books are immortal, infertile psychically blank offspring of the Emperor himself with a variety of powers and abilities. They are a hidden brotherhood of warriors against chaos, who believe that they will fight in the final battle against chaos. The Lost & the Damned writes that the Sensei are champions of the Star Child - the soul of the Emperor - and are fighting for his return. Slaves to Darkness suggests that the unaware Sensei will in fact be sacrificed in order to resurrect the Emperor, and will be consumed by him. Either way, these ageless paladins are feared and shunned by both humanity and its enemies. Check out the excellent detailed discussion on Sensei over at Leadplague if you want to know more. 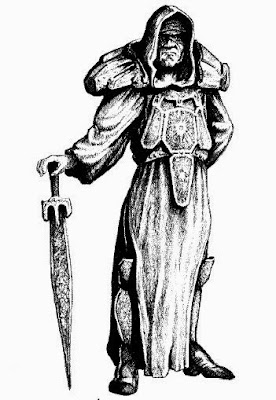 To me the Sensei are clearly the Jedi of the 41st millennium. They have mystical powers. Many of the illustrations portray them in monastic robes, wielding swords. There is even a figure in the Rogue Trader space pirates range that must be a Sensei, he is so closely modelled on the illustrations.

I decided to make a pair of Sensei using the model I mentioned above, with a companion figure that would draw on some of the same visual cues. I figured they could be a pair of Sensei brothers who travel the universe seeking agents of chaos to eliminate.

There are rumours of two brothers known only Aegil and Aegon. They move from place to place, making no ties and never staying long. Those who speak with them say they are both ancient and ageless, benevolent and unsettling. After they have left an area, there is always a mystery th
at cannot easily be answered - a dealer in arcane books disappears; an exotic dancer is found decapitated; a foul stinking mutant corpse is dumped in an industrial wastezone. 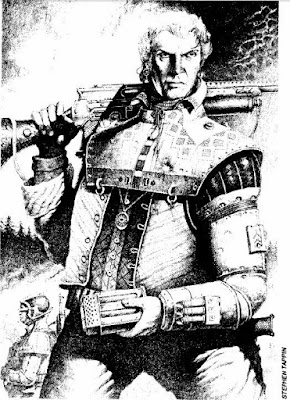 Aegil is converted from the genestealer magus advisor who usually accompanies the throned patriarch. I have wanted to use the model for a conversion for an age because of his unique outfit.
1. I first cut away the right arm and head, removed the genestealer icon hanging from the belt and repositioned the left arm, leaving me with a blank headless torso to work from!
2. I pinned the new head and arm into place. The head came from a Rogue Trader Imperial Guardsman, and the arm was from the Last Chancers Colonel Schaeffer. 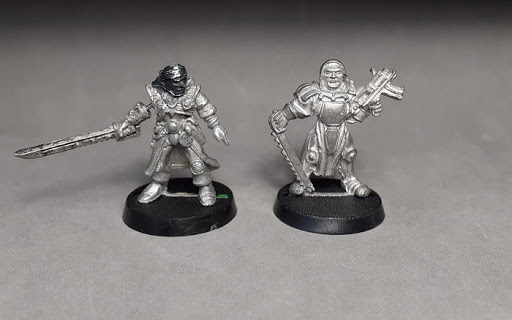 3. First layer of sculpting. Here I filled the deep voids at the neck and sculpted the right sleeve. I pressed a design into the icon at his waist to create some kind of high-tech grenade or sensor. 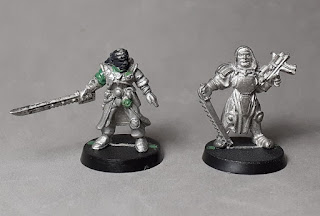 4. More repair work, including the collar and hood, headband tassles, little gadget on the chest and a central vent. 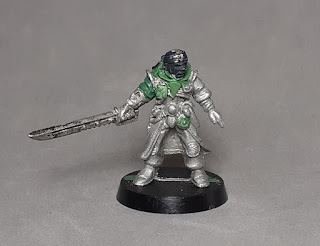 5. On the rear you can see the new hood. I also added some greenstuff to change the look of the backpack a little. 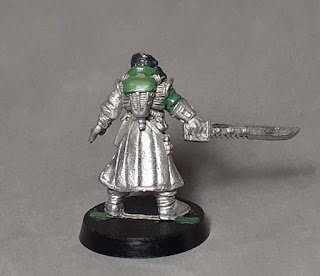 6. I really struggled with the central vent. I wasn't happy with this circular design. 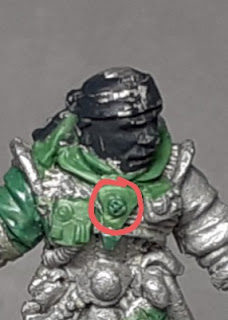 7. Or this crude ridged one. 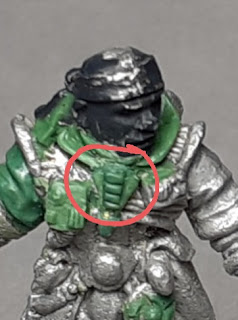 8. Final front view with a better central vent (not perfect, but I couldn't be bothered to rework it again!). 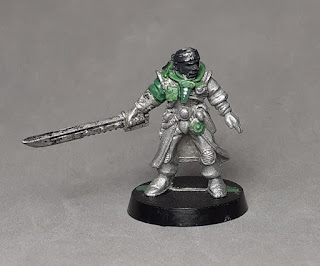 9. And the final rear shot with some added buttons. The rectangular ones were shaped by adding a thin strip of greenstuff and trimming with a craft knife. The circular ones were stamped out using the nib of a technical pencil. 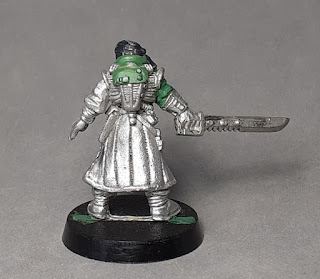 After the converting, I went for a common vaguely Jedi-themed colour palette with some nice browns, and a dark grey (which loosely ties them to another Sensei I painted a few years back). I added a little star motif to the headbands to denote their association with the Star Child. 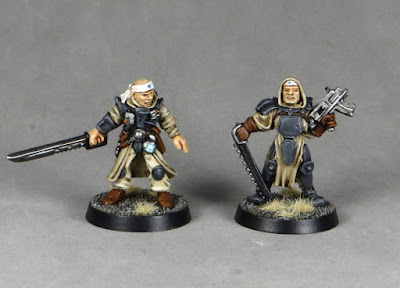 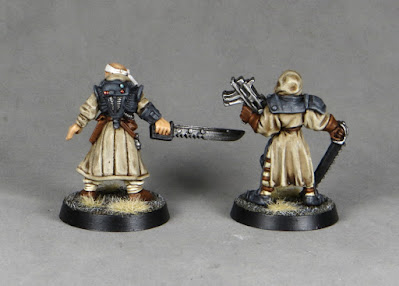