Sometimes you see an idea that's so cool, you just have to copy it! Since GW's Blackstone Fortress game was released, I've seen half a dozen or so really great figures with spindle drone heads as heads or masks. I knew it was something I wanted to try myself, and decided the best way to use them would be on some robe-clad desert-dwelling xenos race in the Tusken raider tradition.

I've converted and painted a pair of aliens based on this template, and I like them so much I intend to make more!

I'm calling this cyclopean xenos race the T'Sul. They draw on a lot of the archetypes of nomadic desert tribes such as the robes and long jezail-like rifles. The concept sheet below shows how I work through ideas in terms of potential conversions and influences. Note that not every single concept will be realised into a miniature, but doing this really helps me to plan conversions, and to see what works or what doesn't. 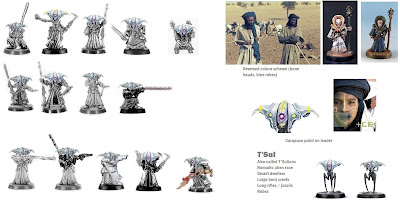 The first two figures had to set the visual direction for the rest, so I went for my favourite two concepts, both with the trademark long rifles that will characterise most of the warband.

The first figure was based on the iconic chaos warrior / champion with jezzail. The original sculpt has a shorter coat and hooves (see Asslessman's brilliant painted version). I extended the coat and added a new pair of feet (the original hooves are underneath the greenstuff). 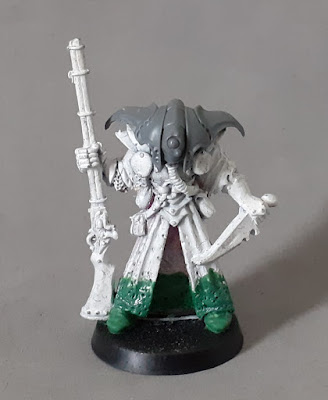 I had to cut back the hood to get the new head to sit properly. This needed a little bit of filling to repair the damage. 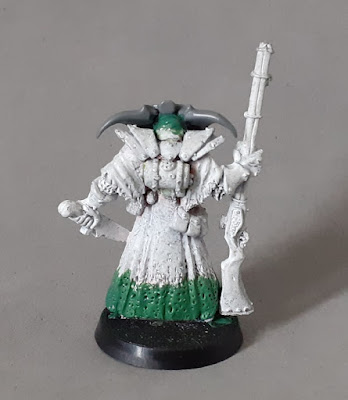 The second warrior was based on Hutk-Nke Plague Priest, one of Jes Goodwin's classic chaos sorcerers. This time I removed the staff and replaced it with a jezail from a historic wargames manufacturer. 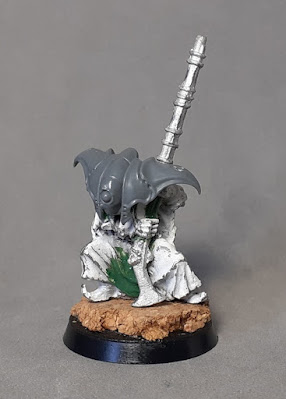 Again, I needed to do a little bit of repair, this time at the front of the robe as well as the join at the head. This warrior also got a pistol accessory from the 40k Kroot sprue. 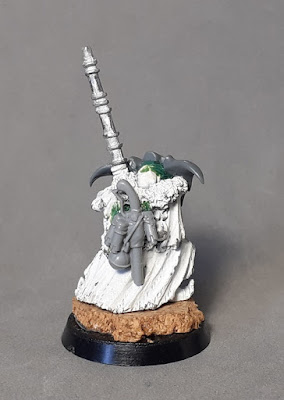 The sorcerer model is significantly smaller than the chaos warrior. That's no problem, as I'm perfectly happy to have height variation between the figures. I did decided to add a little bit of elevation to the second model with a rocky outcrop made from a cork table mat.
In terms of painting, I wanted to keep the colour scheme relatively simple to match the colours I identified in my concept image. They both got nice dark blue robes, offset with a range of brown equipment, and of course those big bony head crests. 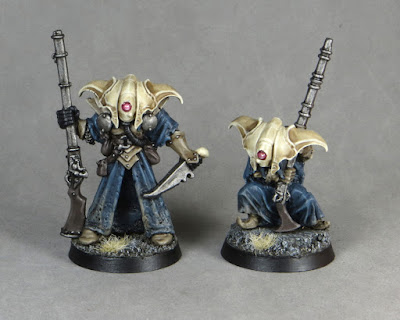 I painted the eyes with GW's contrast paint (my first use of it) before adding a white reflection dot and a nice coat of gloss varnish. 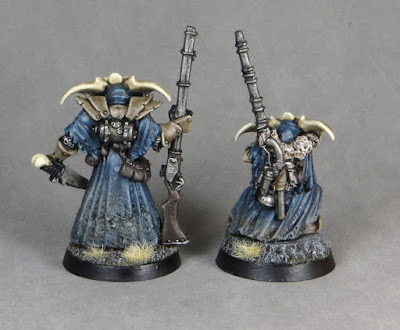 It's not overstating to say that I think these are my favourite figures I've made this year. I can't wait to make some more and get them onto the table!