No, the circle house is not circular, but bedecked with a rather handsome paint scheme by its inhabitants! Yet another pre-production building from the imminent Mud Brickstarter Kickstarter from Fogou Models, this is a delightful little bijou residence.

The building comes with separate roof and door (both of which I've glued). Unlike my previous workshop, I've been restrained with the accessories, just adding a discrete Fogou A/C unit to the rear. 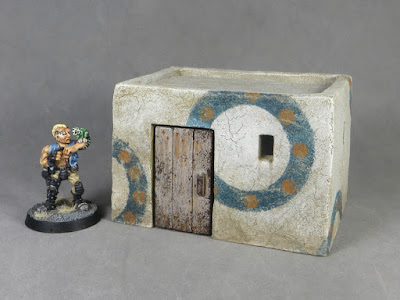 I started the paint of with the now standard desert yellow basecoat and off-white drybrush. Whereas the other buildings to date have had angular stripes and geometric designs, I wanted to see if I could go with something a little more curvaceous. So I cut out a circle stencil by tracing round a few slottabases, and stippled on the blue circles in a random design (other than up, then down) over the building. 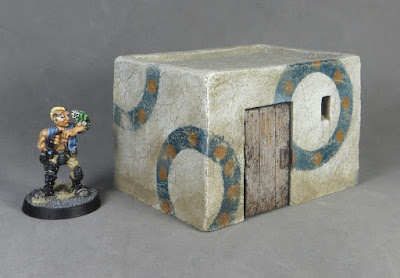 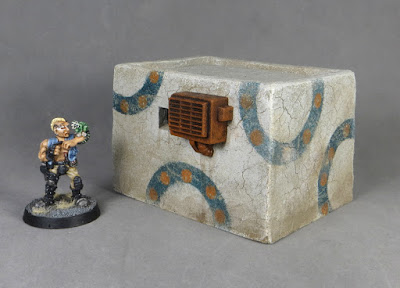 I felt the blue circles alone weren't quite enough, so went back with a piece of paper from a spiral bound notebook, and used the small pre-perforated holes as stencils for the small orange circles. 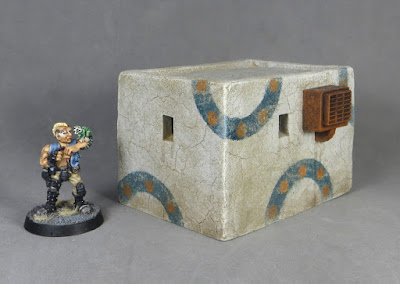 After a little bit of weathering with some washes and browns, the building was done. And these are really starting to look fantastic when you group them together!


(Figures pictured above include Spacelords (EM4/Moonraker), Colony 87 (Crooked Dice) and crates by Ramshackle Games).
Posted by axiom at 15:52