The Path to Damnation (Part 7) - Enter the Chaos Champion

The journey of a Champion of chaos is long and convoluted, and that pretty much describes the process I undertook in the creation of my Chaos Renegade and leader of his merry band of Khornate followers.

When I first rolled up the Renegade, his attributes included a bloodletter face and horns, along with a pretty underwhelming sword and bolt pistol combination. My immediate plan was to use on of the lovely Jes Goodwin champions: 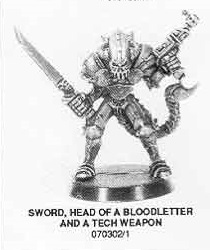 But mid-way through the creation of the warband, this started to feel a little underwhelming. If I was going to create a Renegade from the 41st Millennium, then I really wanted him to be unique, imposing, and most importantly, not just an unmodified fantasy figure. So I started mocking up some potential conversions. For a long time, #3 was the front runner. I even got to the point where I was about to start chopping up some old figures. 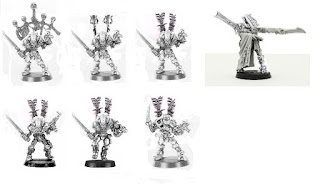 I still wasn't convinced until I was looking in my boxes and rediscovered the 2001 Games Day figure - Kroot Shaper Angkhor Prok. I quickly mocked up a new concept (top left in the image above), and that was that decided! 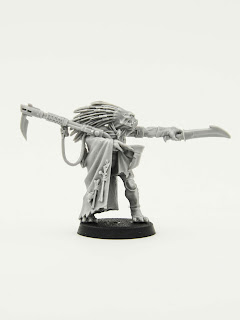 The base figure has a really nice pose and presence. I could also magic away the two-thumbed hands and odd shaped feet as being part my renegade's transition to daemonhood.

I removed the head and left leg, along with the rifle (which was, I don't mind telling you, an absolute pig of a task). I then replaced the head with the head cut from my original intended Jes Goodwin champion. 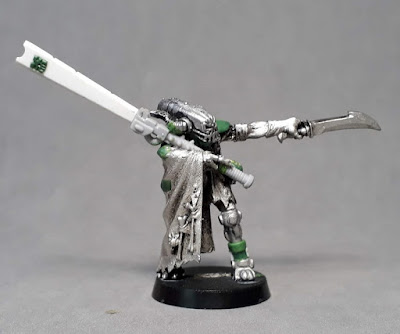 The bionic leg comes from an old Rogue Trader Imperial Guard captain, although I had to lengthen it a bit. The massive over-sized glaive is a combination of a blade cut and shaped from plasticard with a 2nd edition Space Marine power axe handle.

Ctzezmu, Beloved of the Dog King, Keeper of the Blood Skull and wielder of the Morrow Glaive. He bears the visage of the Slaughter-Kin and is blessed with unearthly speed. Fear him. 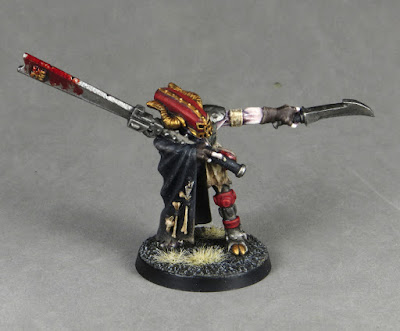 I painted up Ctzezmu in the same palette yet again as his followers, but ramped up the amount of traditional Khornate brass to go along with his natty helmet. After much deliberation, I gave him a weather-beaten black cloak. I briefly considered adding some freehand, but with an already busy model, I elected against it. 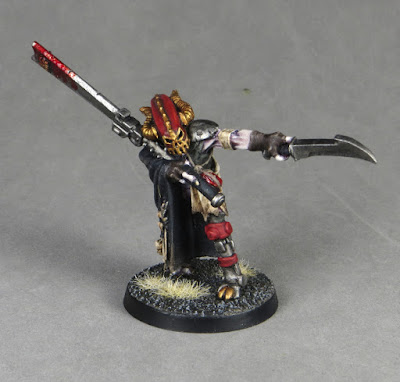 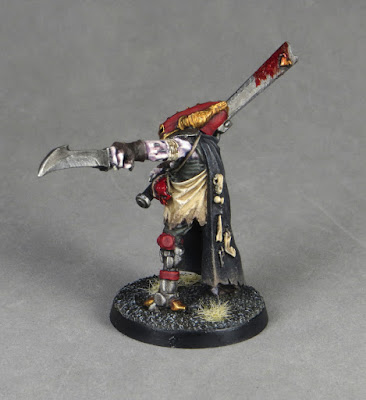 After painting his kilt bone, I then realised that it was adjacent to the skull at his waist. Not wanting to repaint the kilt, I decided to render the skull as a deep glossy red - perhaps this is some potent arcane device or gift from his master. 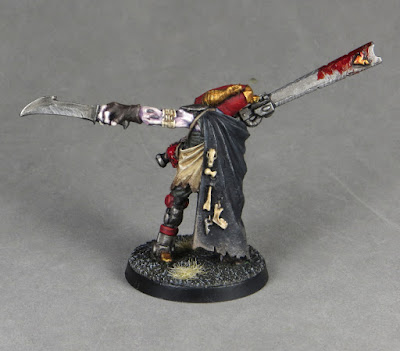 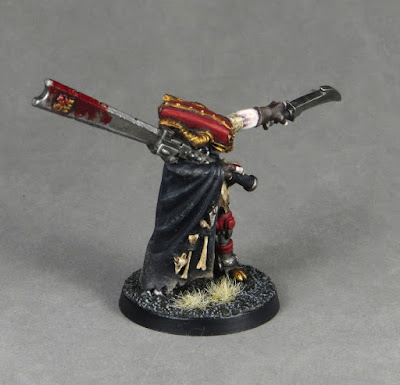 So that's the warband complete (at least for the campaign day in August). So it's probably time to see the whole gang together. 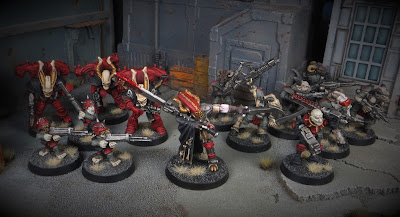 All in all I'm very pleased with the look of the warband - it's certainly got that traditional Khornate feel, and hopefully they all hang together visually without being completely uniform. I'm very much looking forward to seeing how they actually perform as a force and pitting them against some rival Renegades!

Read more about this warband: