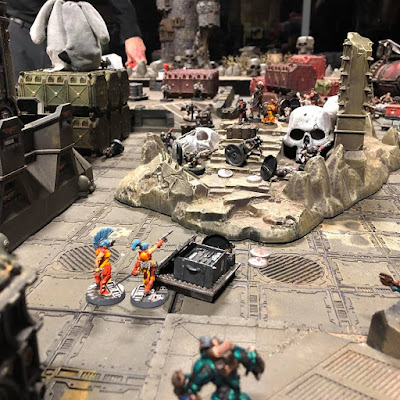 As for the Benevolent Brothers and Wilhelm’s own sibling Jakob – they lay in crumpled bloodied heaps around the foot of the slag heap. They had been charred by plasma. Dismembered by heavy bolter rounds. Scorched by lasers and poisoned by toxins. But in doing so they had been sacrificed to the great ritual!


Wilhelm was unsure where the idea had first come from. He couldn’t now recall whether he received a vision, whether a Delaque had whispered from the shadows, or whether Thrubb had made a proclamation. But the idea had crystalised. A ritual would take place. Three witches would converge, and a powerful being would be created. Perhaps the being would champion the Benevolent Brothers’ campaign of openness and equality for mutants and norms alike. Perhaps it might aid Thrubb to gain the power desired by his ego. Perhaps it would assist The Fade of House Delaque to greater intrigues. And so Wilhelm the Witch, Lady Jayne and The Fade’s grotesque Spyker conceived the ritual. Of course, it was expected that rival gangs would discover the plans and seek to foil the plot. This was part of the ritual: each death was as much part of the ritual as the psychic incantations by the trio of witches.

The Houses of Van Saar, Escher and Goliath banded together to foil the ritual, and perhaps to seek favour with the noble Houses. They encircled the slag heap as the workshift lumins were beginning to brighten. They had emerged from the gloom, and as the light levels rose let loose with a terrifying concentration of firepower. Cultists, mutants and Delaques died. And the ritual was fed. 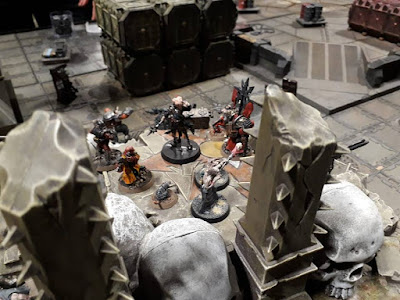 After my previous post (where I talked about the trophies I made to award at the end of my gaming group's Necromunda campaign), there were some calls for a battle report of our planned big multi-player finale. I don't really enjoy writing battle reports, and usually forget to take photos. But I do like writing a bit of narrative, and my friend Jimmy Smith (jamesworshop.net) let me use the excellent photos that he took on the night. So that's what you've got!

In terms of the mechanics of the game, ably GM'd by Mike, two chaos cults had entered into a nefarious deal to conduct an arcane ritual, using the combined powers of two witches and a Delaque Spyker. Seven other gangs were pitted against these three, all aiming to halt the ritual, and the assumed dire results that could materialise. Each player was allowed to select seven members of their gang (these generally turned out to be the most badass fighters with the best gear).


The ritual would be completed after the ritualists had accrued 40 summoning points between them:
But of course this was only known to the ritualists - the other gangs had no idea that indiscriminate killing would aid the ritual, and that the key to stopping it was to target the psykers.

In addition, each gang also had an individual secret objective, scoring points for achieving different goals. By way of example, the Benevolent Brothers would score 3 points each time Wilhelm the Witch successfully passed a willpower test to cast a psychic power, 1 point each time one of the cult went out of action (and was sacrificed to the ritual) and 10 points if Wilhelm was the psyker who completed the ritual.

And then it happened! The last blasphemous words of power escaped Lady Jayne’s lips. The hidden dark mark within an Escher fighter of the Hive Queens drew the being to it, and with a terrifying shriek it erupted from the warp. Lightning of pure chaos crackled and foul psychic winds swept through the dome. The obscene daemon creature was huge, the colours of smoke. A deadly beak the length of a long rifle protruded from its black close-feathered head. Its lumpen grey-feathered body ended in vicious clawed feet, partially hidden by its plumage.

The daemon slashed and rent in a bloody slaughter. Some of the hive gangers retrained their weapons in the hope of harming the creature. Others took opportunity to seek revenge on rivals for petty slights. Golgothus the Beast of House Goliath bellowed a challenge and grappled the daemon at close quarters. The Rad Hazards knelt around their leader before spontaneously giving themselves to chaos and then launching themselves at their former Van Saar brothers. The cultists atop the altar still fell and great gouts of warp energy spurted from the daemon as it was attacked from all sides.

The result of the ritual turned out to be the summoning of a Lord of Change*, randomly spawning into the body of a ganger who had either previously gained a hidden mutation, taken ghast or cast a psychic power earlier in the campaign. A giant, 20-wound creature with terrifying stats. As you might expect, most of the gangs decided to take a cautious approach, blasting at the daemon with their most powerful weapons from a distance. The Bone Town Boys of House Goliath took a more up close and personal approach as befits their character!

And finally, the Alpha Minxes of House Escher cast the final blow. The daemon shattered into blinding splinters, leaving nothing behind but mangled corpses and tortuous scorch marks. In the sudden silence, firing ceased. Gangers tended to the wounded or slunk back into the shadows. But Wilhelm giggled. This too, was part of the ritual…

As the dust settled, we all tallied up our points, and it turned out that the Cult of Thrubb had emerged triumphant, having accrued big points from speaking the final words of the ritual. Whether any of the gangs will seek to heal their wounds and recruit new members for the next campaign, that remains to be seen!

*You might see a fluffy penguin rather than a mind-shattering daemon form. What greater demonstration of the insanity of chaos is there?!
Posted by axiom at 09:06