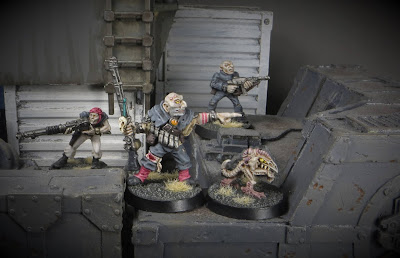 It just so happened that back in 2015 when I was making some completely unrelated chaos cultists in pink, I had criminally decapitated a Jes Goodwin skaven champion with a jezail. He had sat unpainted in a pile for over three years, so I took the opportunity to look at him a second time.

Unfortunately I didn't photograph the original conversion. Essentially it was the skaven champion with the head of a half-orc, complete with signature skaven feet and skaven robes. I very nearly painted the figure there and then. But after a moment's reflection, I decided that the short stature and recognisable silhouette needed a touch more modification to create the character I wanted. So I hacked the figure in half. What followed was a nervy half hour where I attempted to locate some legs that might gel well with the upper body, and with the look already sported by the other cult members. 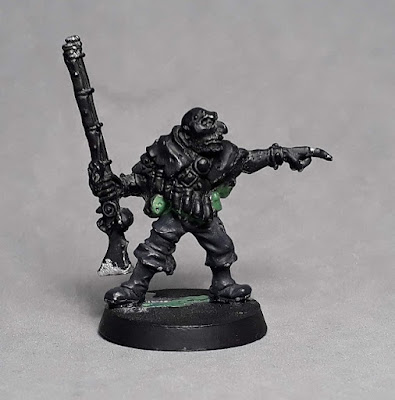 In the end I settled on the legs from a wounded Imperial Guardsman. I joined the two pieces together before adding a selection of bags and pouches to conceal the cut marks. On the rear I had to repair some of the damage to the robes (now tunic). 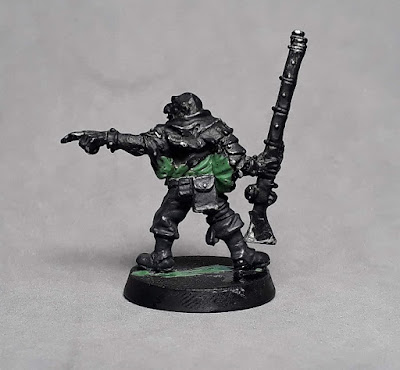 At this stage, I still wasn't sure if the figure would hang together. But I did like the pose and the presence that the figure had gained with the extra height.

Happily, with a paint scheme tying everything together, Dolor, my new disciple has exactly the look I was hoping for. The half-orc head and over-long fingers give him enough of a mutie look to blend in with the rest of the cult, while the Imperial Guardsman legs are ragged enough to not look out of place against his tunic. 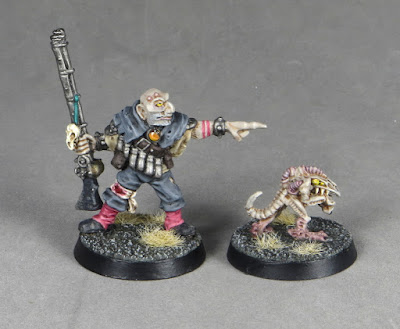 He's got a few elements to suggest that he's in the higher echelons of the cult (his big jewelled broach and ritual bodypaint). Whilst I was painting him I decided to add in a classic chaos familiar too - familiars can be taken as protective wargear by chaos cultists. 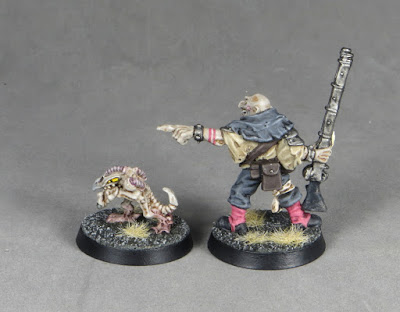 Hopefully he'll prove to be as effective in games as I'm anticipating!
Posted by axiom at 12:31