Every Confrontation gang needs an unmistakable leader - that flamboyant model with the over-sized gun or waving their powerful combat weapon. The Sutter Dukes have previously been led by the Magpie Dandy, but with an updated gang, I wanted to use the excuse and paint up my unreleased Bratt leader.

The sculpt dates from the early 1990s, along with the other unreleased Bratts, and is the pinnacle of over-ostentation. He wears a quilted split tunic over a shirt with puffed and slashed sleves. He has lace cuffs and ribbons and bows galore. He wears heeled and buckled boots, and an astonishing hairdo. In essence, he is the ultimate Bratt. The brattiest Bratt!

Beau Rouge is making a name for himself in the Sutter Dukes. Starry-eyed young fops admire his razor-sharp spire fashions and somewhat ultra-violent nature. Some even whisper into their scented cuffs that Beau has designs on usurping the Magpie Dandy! For now, Beau is content to undermine his father, the famous insterstellar merchant, Rouge Trader through his self-indulgent and reckless activities. After all, being noticed is everything. 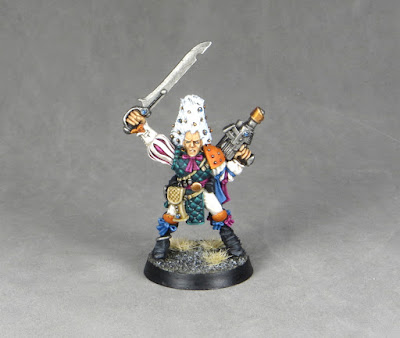 As with the previous members of the Sutter Dukes, Beau Rouge got the jade, orange, white and magenta colour scheme. All the little details necessitated a longer time spent on the figure than I normally do. But I think the result was worth the extra time spent. 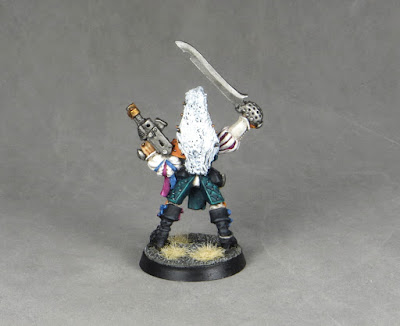 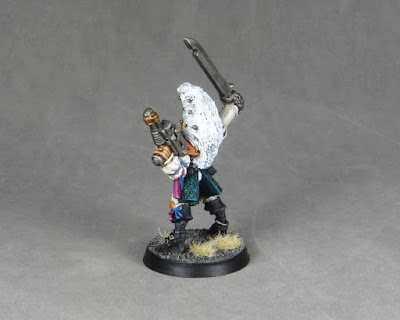 The jewelled mane that the figure sports is very reminiscent of some of the Harlequins that Jes Goodwin also sculpted. Both Jes' and John Blanche's concepts sketches for the Bratts suggest that their styles were influenced by Eldar dress, so I guess this is no coincidence. 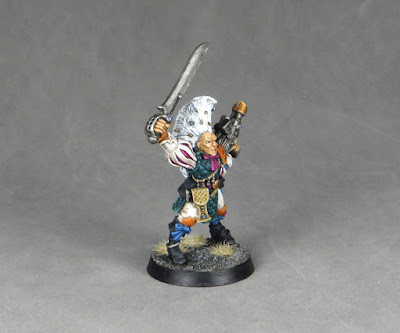 In finishing off the Bratt leader, I have now painted all five of the unreleased Bratt models (although ironically, I still need to paint up two of the Bratts that were released). I'm pretty pleased with how they all look together. 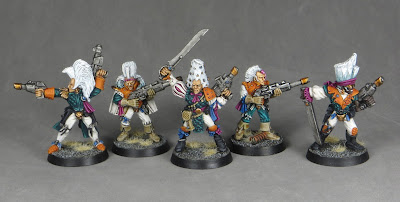 I still have one final gang member to add to the Bratts in order to have them game ready for the campaign day in a month's time. I'll show off the completed gang when she's done.