It's been 6 months or so since my last visit to the Choose Your Own Adventurers project. In theory, I think it might be cheetor's turn, but seeing as he's enthusing about tiny little sailing ships, it might be a while yet before we restart things. Consider this a bonus post linked to the project!

That said, I wanted to include a female figure in with the rest of my Bratts. The space amazon from the RT adventurers range was a good candidate - what with her tremendous hair, love of bows and rather exotic outfit. Curis has of course, already painted his wonderful version of the space amazon for the project, so I figured I could include her as part of the Sutter Dukes with no real issues.

Isabelle Vienne AKA The Duchess is an integral part of the Sutter Dukes' hierarchy, occupying a place in the inner circle along with the Magpie Dandy and Beau Rouge. Where many Bratts tend towards impulsiveness and impetuosity, Vienne is cool and calculating. Most of the more complex hunts and traps carried out by the Sutter Dukes are by her design. Her luxurious furs mark her out amongst many other Bratts who prefer silks, lace and expensive fabrics - they owe much to the exotic fashions of House Escher, even if the fighters of Escher wouldn't recognise the upper-Spire translations of their characteristic trappings. 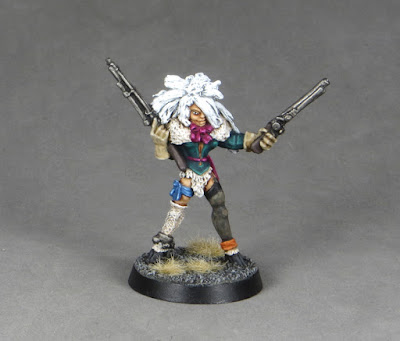 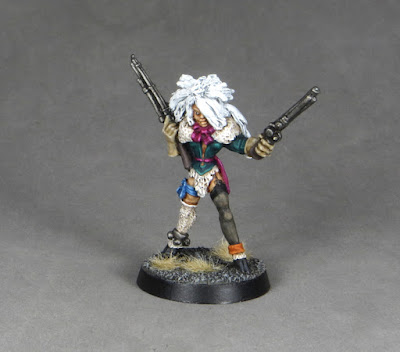 I painted Isabelle with the same palette as the rest of the Bratts yet again. I went for an off-white fur as the least intrusive addition to the scheme - introducing a brown or something else would have probably meant using a new colour that didn't appear on any of the other Bratts.

I'm most pleased with the stocking on her left leg. This was painted flesh colour then washed numerous times with a black wash to result in what I hope looks like translucent black stocking material. There were several points where I was convinced this was going to look absolutely rubbish, but I persevered and I think it came out OK. 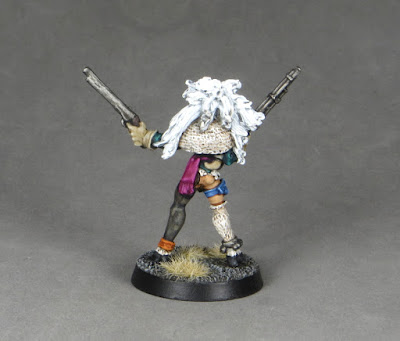 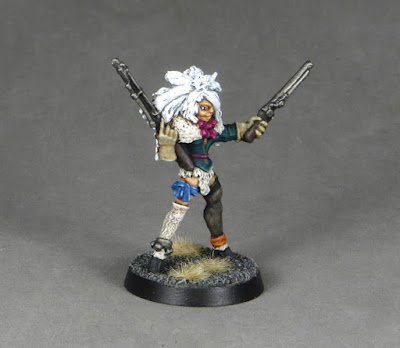 Isabelle does differ stylistically from the rest of the Bratts, with her furs and archaic looking weaponry, but I think the colours help to tie her in sufficiently.