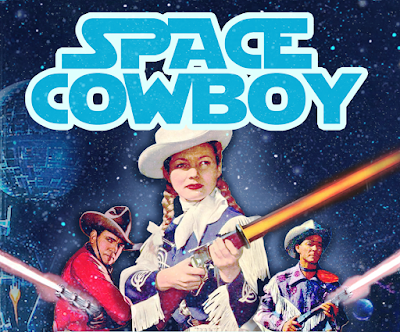 Dracula's America in Space (DAiS) was born.
Cheetor over at Sho3box has already proven that the concept works rather nicely, and has painted some lovely Ratskins as a Skinwalker tribe.

The plan is to run a game of DAiS at Bring Out Your Lead 2018, hosted by Wargames Foundry. Each player will bring a small posse of space cowboys or similar to use. We've limited players to bringing three fighters each (a hero, veteran and novice). As most factions in Dracula's America get some cool fighter upgrades (for example a member of the Red Hand Coven can upgrade to be a Bloodkin - a vampiric thrall of Dracula himself), we've allowed most factions to include a vampire, high priest or other similar supernatural nasty.

With all that in mind, I put some paint to some figures I'd had in mind for DAiS ever since the concept was first floated. I fancied using some Rogue Trader Imperial Guard as Dark Confederates - sinister Southerners who have taken to using zombie slaves.

My small posse comprises an officer, two troopers and a revenant (zombie): 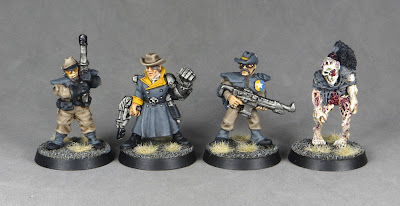 The two troopers are Imperial Guardsmen with head swaps. I added the head from the be-hatted Rough Rider torso to the autogunner, and the capped head from a sentinel driver to the lasgunner. I then added a little facial hair to reinforce the theme! 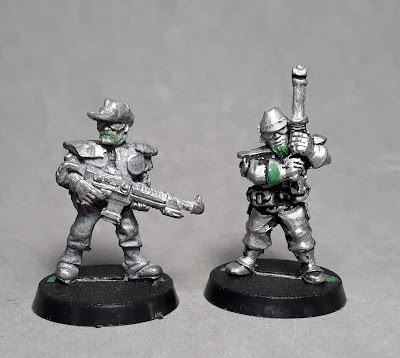 I painted the troopers in a scheme which could evoke Confederate uniforms, with brown fatigues and grey body armour. I chose a star for the unit badge because it looked a little like a sheriff's badge and further reinforced the Western theme. 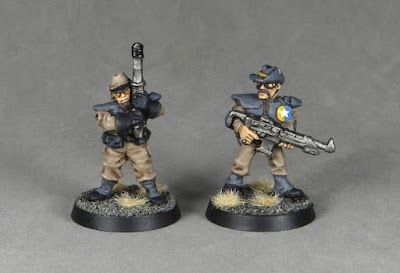 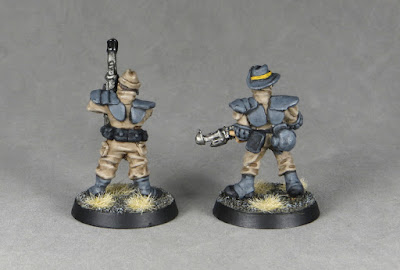 The officer is converted from a lovely one-piece Imperial Guard Commissar sculpted by Mark Copplestone. I was a little hesitant when it came to chopping him up, as the original model is so nice. But in the end I decided his sword and peaked cap had to go!

He's pictured below with the Southern gent that I plan to paint up at a future point to accompany the posse. The sword got replaced with a laspistol, and I added a hat from Black Cat Bases. 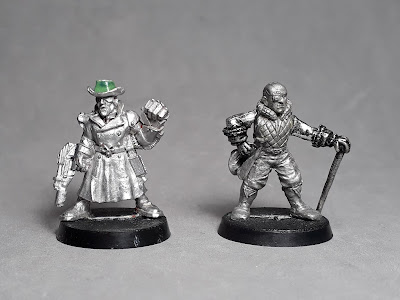 In keeping with some images I found of Confederate officer uniforms, I painted his coat grey with yellow trim. I think he works pretty well as an amoral officer. 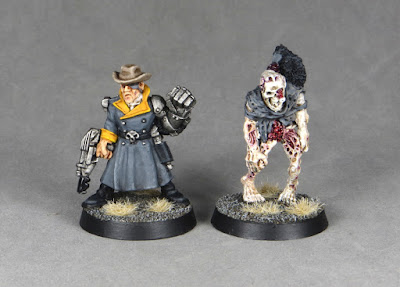 The revenant is a completely unmodified Citadel C18 series zombie, called Pek-Gregi in the catalogues. Sculpted by Kev Adams, he is simply (in my view) the best zombie Citadel have ever produced. The pose is great, and combined with the crow pecking out his cranial matter, you have a suitably frightening undead figure. 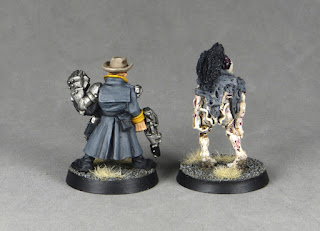 I painted Pek-Gregi with tattered grey clothing (rather than the brown fatigues) mainly for the contrast. But it does suggest that he's a dead officer rather than a trooper.


I plan to add some more DAiS figures to this quartet to give me both a functional full posse and a squad of Imperial Guard. But for now, these troopers are ready to take on a space vampire, native shapeshifter or whatever dastardly cultists might oppose them amongst the cacti.
Posted by axiom at 12:01