I suspect many of you Rogue Trader fans have looked at the 'Battle at the Farm' scenario and wished there was a nice set that would allow you to recreate it. I suspect it's no coincidence that the Fogou terrain set might provide you with a good solution.

I took a few moments to lay out a simple table along the lines of the 'Battle at the Farm' schematic. By supplementing the Fogou set with some palm trees (my orchard is palm dates rather than apples or plums), a small hill and a fuel tank to represent the generator, I could mount a more than passable Battle at the Farm. 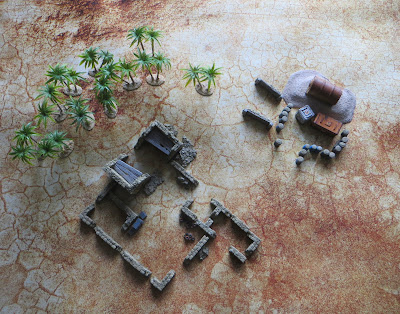 I certainly plan to use the set for some gaming at the forthcoming Bring Out Your Lead event over at Foundry in August.

And what use would a farm be if there were no farmers? Just like Scrawler in the previous blogpost, I wanted to use the farm as an excuse to add some more figures to my collection. This time I fancied some rural backwoods types, and I looked no further than Citadel's Dredd and Gothic Horror ranges.

Mad Jack and his younger brother Hilly Bill have lived in the hills around Black Dust Gulch for as long as anyone can remember. They run a small-holding, farming groxen, distilling a vile hooch and generally keeping themselves to themselves. A small skirmish between a squad of Space Marines and some unruly orks saw their family homestead destroyed, so the brothers have retreated to a small shack in the bush, only emerging for resupplies of necessities. I kept the colour scheme on the pair relatively close - the yellow patches on Mad Jack's jacket match Hilly Bill's shirt. I also didn't spend a huge amount of time painting them - probably 3 hours in total for the pair - after all, they're supporting cast rather than principal actors!


The Fogou terrain really does provide a great backdrop for setting up some lovely scenic shots. It was also great to use it as a springboard to get some more figures painted.