The House of Yakob - Another Building for Helsreach

I know the title of this post says Helsreach, but I've decided I could do with naming my own distinct settlement as a different setting for all my buildings. Something like 'Blackdust Gulch' or 'Edge Town' perhaps. I'll give it some thought.

Today's post shows off the newest addition to the collection of buildings - a mid-sized two-storey house which has become the dwelling of the merchant Yakob Pento (now he's moved from Necromunda, where we last saw him!). 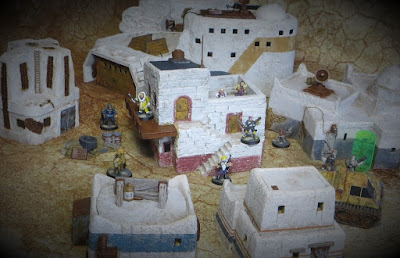 The building in question is one of a pair of lumps of solid resin I bought a while back, I guess designed for historical gaming. I've left the other, smaller building for now, instead focussing on the larger one, as it had more playability with the stairs. 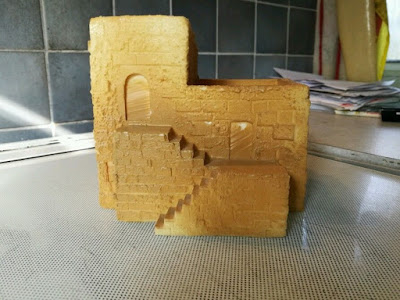 Whatever the source, this is a rather crude cast, with lots of air bubbles and misshapen details. The resin is that horrible really slippery stuff which flakes paint as soon as you look at it. Nonetheless, I've persevered!

You can see on the photos below that I made some additions to the building, including a roof vent, comms aerial, new doors and balcony.

Painting was done using exactly the same techniques as my previous houses (drybrush of off-white over a sand colour basecoat, then some detail painting over the top. It's not perfect, and I would have liked more of the base colour to show through in the recesses from the white, but terrain doesn't need to be perfect, it just needs to act as a nice backdrop for the figures! 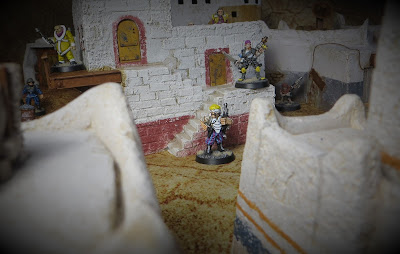 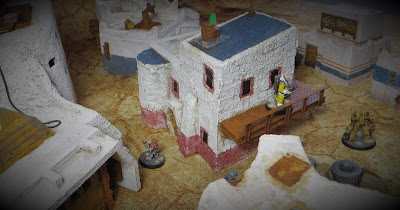