Less than a fortnight ago, I painted up the first 40k Space Orc and Space Goblin. You might have picked up on the fact that in about 28 years of gaming, I'd never had the slightest interest in playing with anything orky. But painting that pair of figures sparked something. I rooted around in my boxes and unearthed enough ork figures to make a small warband.

So it was straight into the stripper with the painted figures, and some final prep for the others. I decided to start off with a second grot and the converted 'heavy'. 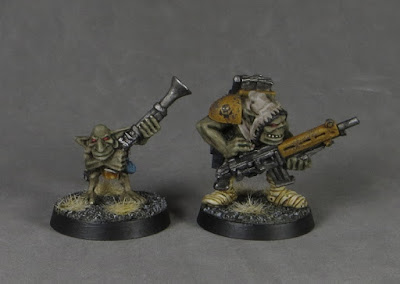 The grot is a duplicate of one of the ones I converted an age ago into one of my feral ratlings. I like the contrast between this semi-naked grot, armed with a basic blunderbuss, and the militarily-equipped grot I first painted.

The ork with the heavy weapon (probably a heavy bolter / big shoota, depending on the game I'm playing) is converted from a fantasy crossbow orc. The conversion was actually originally intended as a mutie for my chaos cultists, but I never got round to doing the head swap I planned. Happily, he works pretty nicely as an ork with old school fashion taste!


The conversion simply places a Necromunda heavy stubber and backpack on the orc. I added a plastic grip to the heavy stubber, and made some minor modifications to his left hand. The shoulder pad was a late addition from a plastic Space Marine Scout. 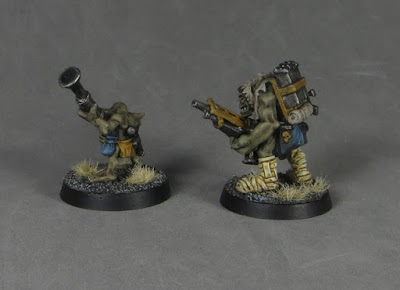 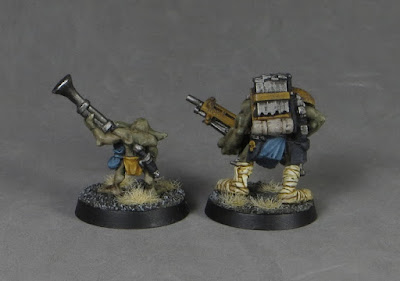 Painting wise, this pair got the same colours as the previous two orks. I was conscious that the heavy weapon ork didn't have much armour, so I tried to pick out some hard metal areas to paint yellow (gun casing and the backpack frame). 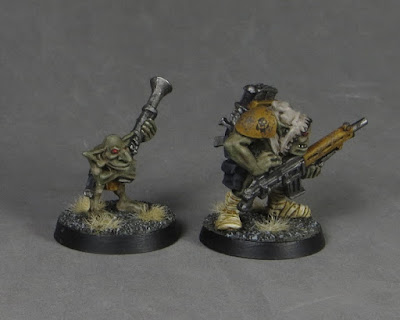 I added the glyph transfer on the pad and the dags on the hood to try and break up the flat colour areas a little. 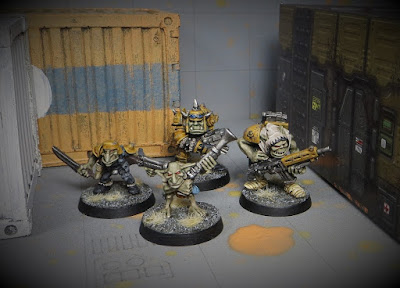 Typically, I've already started looking out for more orks to add to the group and bring it up to around 12-15 members. Maybe I do like orks after all!
Posted by axiom at 15:43