I do like making models as a result of external influences. Those suggestions that your mates make. The themed group projects. The online community competitions.

This latest figure has been created for the 'Beware Mutants' competition on the Emporium of Rogue Dreams Facebook group (the same group that hosted the Abdul Goldberg competition last year).

The rules for the 'Beware Mutants' competition are simple:
I rolled up a single mutation for my mutie, which turned out to be a pin head.

Excellent. That sounds like fun! Here's the resulting mutie: 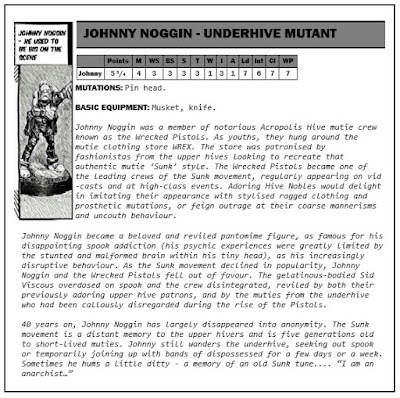 I wanted Johnny to be more in the vein of tox swamp and rad muties from 2000AD, rather than the bizarre creations of chaos which are more common in the Warhammer 40k setting. To this end, my mutie had to pretty much make sense biologically.

I started my conversion by looking around for suitable heads. In the absence of something like a 15mm scale head (which may well have been too small anyway), I ended up settling on a nurgling. The nurgling had a tiny cranium but exaggerated features - perfect for a weird mutie. For the remainder of the parts, I selected the lower body of a headless Rogue Trooper (head used on a previous conversion), and the torso of a grot (missing it's feet).

I removed the feet, legs and horns of the nurgling, then attached the resulting 'face' in front of the shoulders of the grot body, having clipped away the grot's head. The torso got mated with the legs, and then the repair work started!

With the conversion complete, it was on to the painting. Did I say the conversion was complete? In between the pics above and getting round to painting the mutie, I started mulled over names and background, in particular names using slang words for 'head'. 'Pat Noodle' was high on the list at one point (noodle = head). But I kept getting drawn to 'Johnny Noggin' (noggin = head). And Johnny Noggin sounds a bit like Johnny Rotten. And then I started writing the backstory...and it was clear that Johnny Noggin was another multiverse incarnation of Johnny Rotten. Which meant he had to have spikey orange hair.

So I added some spikey hair, and it was on to the painting.


The hair, obviously enough, needed to be bright orange, and I knew I wanted the skin to be unhealthy and sallow. The Johnny Rotten connection put me in mind of red, white and blue, and that was that! 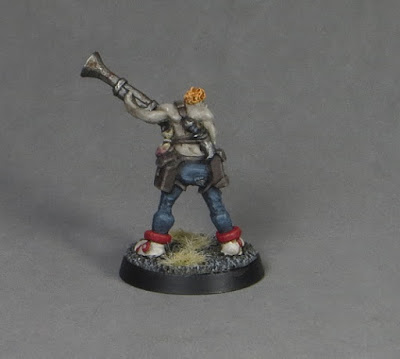 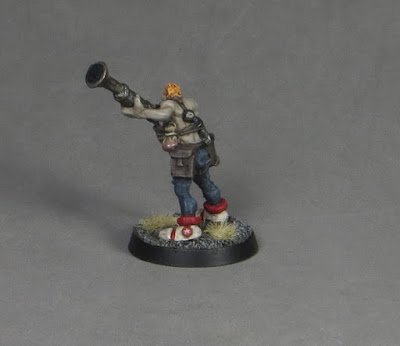 All in all, I'm pretty pleased with how Johnny's come out. I probably need to make Sid Viscous and the rest of the Wrecked Pistols to hang out with him!