Very possibly you'll already seen some of the excellent BOYL 2017 coverage elsewhere on the net﻿ (try Crucium Giger or Dear Tony Blair or Shadowkings), but it only seems right and proper that I give an overview of my weekend. After a Friday of fun at Warhammer World, I arrived with Erasmus Papafakis ready for gaming.

First order of the day was to see how Olivia had cast. Who's Olivia? Olivia is the commemorative event figure, sculpted by John Pickford for the event, and cast by Foundry. I took on the task of organising the sculpting and liaising with John.

We also had input from Will Beck to design us a backpack for sculpting reference for the rear of the figure. 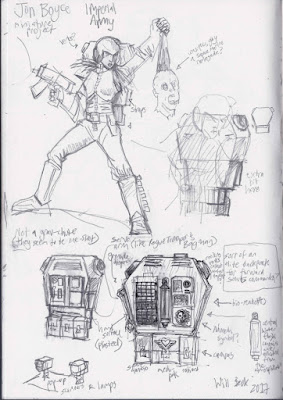 And finally my copy of the figure. She's limited to 161 castings, given away free to event attendees. I believe around 120 were given to attendees over the weekend, with the spares being given to the USA and French attendees for their respective Oldhammer events. 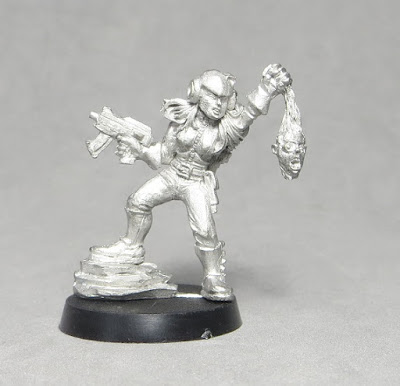 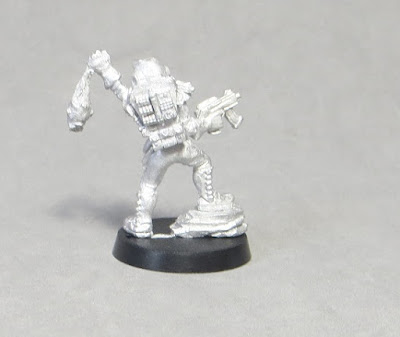 I'm sure you'll agree that John made a fantastic job of the figure, and she's a great memento of the event. Why Olivia? We had a working title of Olivia Neutron-Bomb for the sculpt, and it kind of stuck!

Colin aka Whiskey Priest ran a fantastic Warhammer 3rd ed game using the Eternal Champions characters from Michael Moorcock's books. My Hawkmoon rubbed shoulders with Elric, Corum, Jerry Cornelius and others against the ravening hordes of dangerous gods, using (I believe) stats from a Citadel Journal.
﻿


Colin ran an excellent game, full of peril. It turns out that Eternal Champions aren't that tough after all, as only Erekose and Rackhir survived the encounter. Also, firing a flame lance too early is a silly rookie's mistake!

In anticipation of the experience of racing jetbikes through the town of Helsreach, I'd painted up a jetbike specifically for the game:


The game turned out to be enormously popular, with at least 15 and very possibly more players. Antipixi wanted to play so I loaned him my jetbike to use. I didn't take any in-game shots, but I understand it was a slick, quick and well devised game, and Antipixi managed to triumph with first place!

Whilst the jetbike racing took the attention of a significant number of attendees, I took the opportunity to play in the first round of the all-comers' Giant Killing Championship. Again, this was being run by Whiskey Priest - the basic premise being that the overall winner was the dwarf who inflicted the most number of wounds (or kills) on one of three giants in the fabulous arena.

I'd prepped a dwarf for the game - this rather jolly Norse dwarf.


My rather hamfisted attempts to take down a giant resulted in one wound being caused, before spending the next 4 turns trying to wriggle free from the sack the giant had stuffed my dwarf into! I suspect he ended up being a tasty snack after the game! 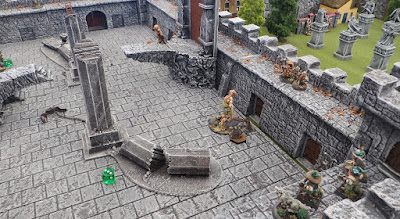 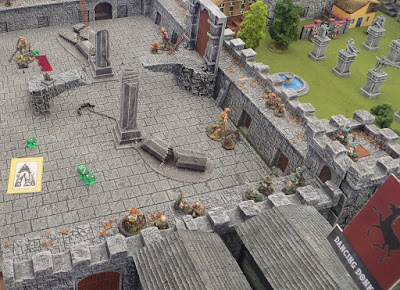 The final game of the day was my own Grox Herding game. I'd devised a randomised, card-based system which dictated the level of control (or otherwise) a herdsman could exert on his grox herd. The first herd into the corral was the winner.

Aiden and Curtis kindly lent us a corner of the Helsreach table to use for the Grox Herding, so we had a fantastic backdrop, as well as other gaming going on around us. 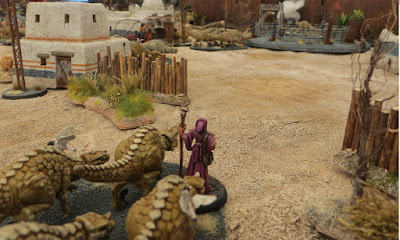 After much taunting and bravado, cheetor's herdsman (an official of the Administratum, Agricultural Division) successfully enticed his herd of baby groxen into the corral to emerge the victor.

I'll leave it to others to evaluate the success or otherwise of the game - there are certainly a few tweaks I want to make before the next run-out. It hit the spot from my perspective as everyone seemed to understand the mechanics after just one turn, and we'd completed in just about an hour - which is ideal for an end-of-the-day game I think.

Tune in later for the third and final instalment!
Posted by axiom at 14:31