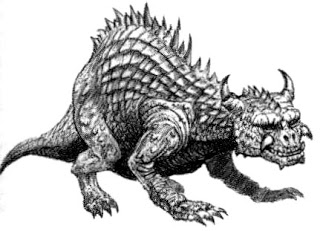 The humble grox is a staple touchstone of 'normal' life in the 41st millennium. You'll often see references in background text and novels (Dan Abnett regularly refers to juicy grox steaks). First referenced in the Rogue Trader rulebook, groxen are an excellent inclusion to any farm-based 40k game! 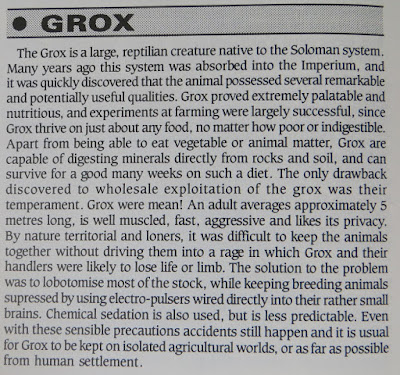 The annual Bring Out Your Lead event takes place this forthcoming weekend. A celebration of old-school Games Workshop games in suitably fitting surroundings at Wargames Foundry. I decided I would run just such a farm-based game - a (hopefully) chaotic insight into the world of grox herding.

Of course, a game based around herding needs some animals to be herded. I started off with suitably grox-shaped beasties - predominantly old plastic cold one steeds from Warhammer. I sourced some large oval MDF movement trays to keep the herds in manageable chunks.


The next step was to increase the visual interest of the beasties with the addition of some tick birds (actually dirt cheap pigeons from China for use in railway modelling). 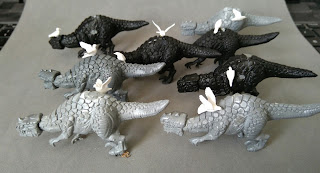 After some boring batch painting sessions (lots of washes and drybrushes), I ended up with 6 bases of groxen to use in the game: 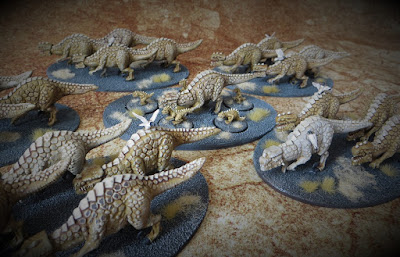 The next step was to develop a plan for the game's objective - a grox-proof corral.

I sourced a lasercut MDF old west corral from Sarissa (it doesn't appear to be available currently). This fit the bill fairly well, but after getting some feedback, I was in agreement that it lacked the necessary sci-fi look.

I rectified this by sourcing some plyons (I think they're from the Mongoose Starship Troopers range) and some generators (from the old 40k Battle for Maggrage box). I then decided to mount them on a base - this time an old cake board I found at the back of the kitchen cupboard (let's hope my wife doesn't need it again!).﻿


Next stage was to paint it up. I confess, it was a bit of a rush job, but it works as a scenic piece I think. 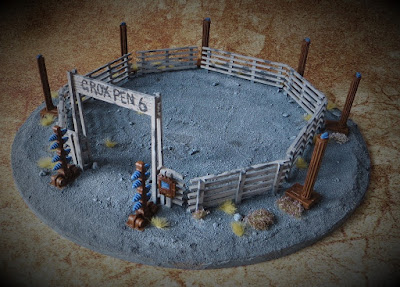 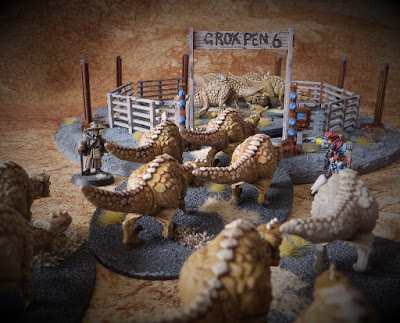 ﻿
I'm looking forward to getting some use out of both the grox herd and the corral at the weekend. Watch out for a full review of the weekend!﻿
Posted by axiom at 13:53