﻿
Interstellar and interspecies wars are undeniably characteristic of the 41st millennium. Some species rouse themselves to galaxy-spanning war with humans, Eldar or Orks. Others confine their attentions to small scale skirmishes contained within a single star-system. Mercenaries bolster stretched forces in return for coin. Space pirates seek plunder from the chaos.
The Starfighter pilot known as 'Xhonni' Xhonzhon is renowned throughout the Tamahl Sector as a brilliant pilot for hire. A member of the largely peaceful Batbayari race, Xhonzhon has incredible spatial awareness and fast reflexes that belie his endomorphic physiology. These are perhaps psychically or biochemically enhanced by the unusual orange-furred cat-like pet, Tsalli. His rugged heavy Starfighter 'Corona' is superbly armed and equipped: in the 73 minute Collar Ring action, Xhonzhon claimed 32 confirmed enemy Starfighters destroyed. Xhonzhon has a history of found supporting oppressed minorities to overthrow dictatorships, even in some instances offering his services for free. For a just cause, and assuming he can be found at the nearest pilot's dive, maybe the best Starfighter ace in the sector can be tempted to sign up.

The model itself is an 'alien and pet', sculpted by Michael Lovejoy for the 2014 Frothers Sculpting Competition around the theme of 'Froth Eisley'. Previous sculpting competitions had resulted in the production of a set of the winning models submitted, but I don't think this ever happened for the Froth Eisley set (correct me if I'm wrong).
Anyway, I really liked this sculpt, and Michael was good enough to send me a copy when he had a small number cast. Of course, if somebody sends you a nice figure, you should spend some time to paint it up. So here's the resulting painted version:
﻿ 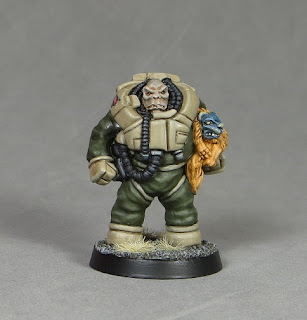 Obviously, I completely changed that approach entirely. In the end I elected for a vaguely WWII pilot colour scheme, with dark skin tone for his face. 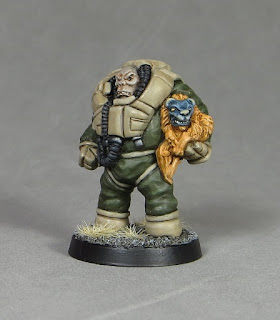 I decided to make his cute little pet a bright counterpoint to the muted green and tan, with orange fur and a vivid blue face. The pet is my favourite part of the whole model, I think. 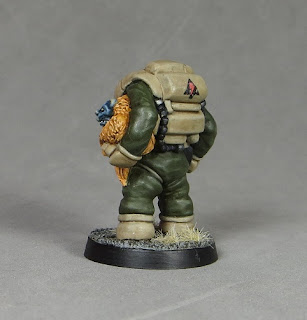 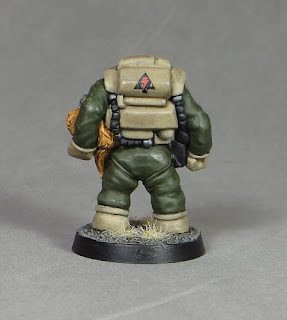 All the cables were painted black, with a touch of blue in the highlights. I finished the him off with the addition of two transfers from an old GW Eldar transfer sheet to suggest his personal badge (in the event I get round to painting him a Starfighter, this badge with obviously need to be prominent on it!). 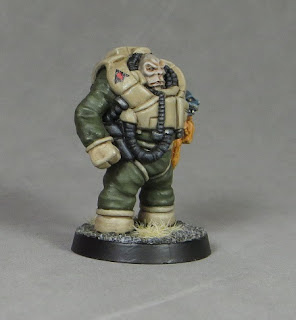 Many thanks again to Michael for letting me have a copy of the figure. It was a pleasure to paint him up! You can check out some of Michael's in-production sculpts over at Oathsworn Miniatures.
Posted by axiom at 11:00