Something had possessed me to buy that oval stone, even though the very thought of it repulsed me. It sat now, in my pocket, like a malevolent toad in a damp hole. I pushed it out of my mind and paid new attention to the day's task: meeting the holo-vid recordist, Wyld. 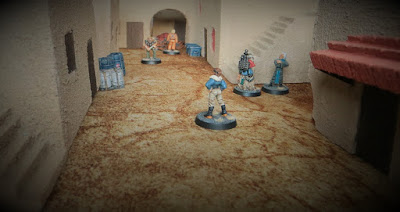 I glanced at my wrist-chron - I was late! I swiftly made my way through the alley ways of Urkar to our pre-arranged meeting place at the Queen's Oasis - a well known kulfee house, with a reputation for high quality and exotic blends.

As I drew near to the kulfee house, I sensed a foul presence watching me. I scanned the dark alleyway entrances and windows, but could see nothing. 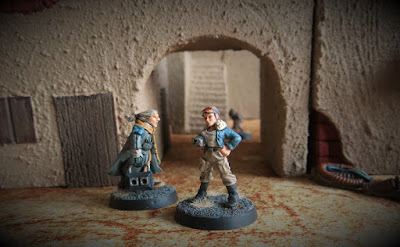 "Stop them!" - a cry startled me, and not thirty paces ahead I saw a pair of burly men manhandling a third figure from the kulfee house. With a shout, I drew my Boringen and ran to assist, but one of the brutes unslung an autogun and let off a burst of fire. I ducked into cover behind some crates, before firing in their direction. I aimed high, for fear of hitting the poor captive. As I watched, the men bundled their captive into a tracked transport, and roared away through the streets. 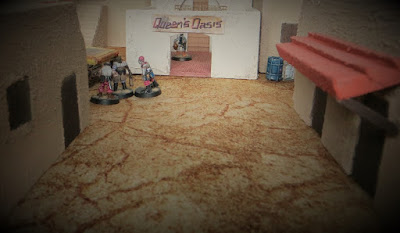 I sprinted down the alleyway, but as I passed the kulfee house, a figure in a green robe darted from the courtyard entrance into my path. We both tumbled into the dust and I jarred my left shoulder. Ignoring the sudden burst of paint, I sprang to my feet and levelled my Boringen.

"Don't shoot! Don't shoot!" cried the dishevelled figure, raising his head to look at me.

"Professor Mascharino!" I gasped, "By the Emperor's toenails, what are you doing here?" 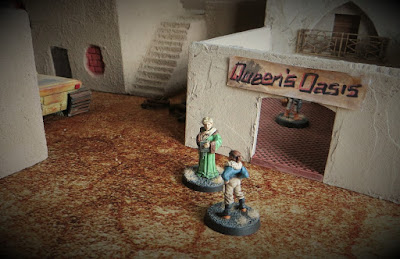 Professor Mascharino
The good Professor is the first 'exchange' figure I've painted for this story, converted up for me by Asslessman. I simply specified that I wanted an 'Academic' for my storyline, so Asslessman made me this excellent fellow from one of my own Colony 87 figures, with a head swap, new left hand, added book and plenty of sculpted details. Asslessman tells me that the Professor is styled after one of his own university lecturers! 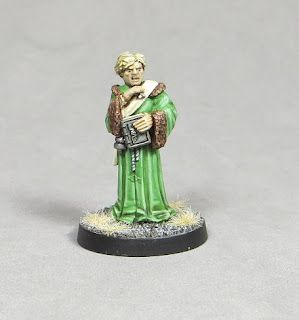 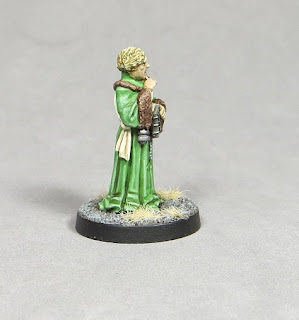 I painted the Professor in pale green robes, merely because I don't often use the colour. I suppose grey or black might have been good choices, but 'academic green' was my selection! I paired this with a cream sash and brown fur trim. Finally, I attempted to paint his hair greying-blonde. 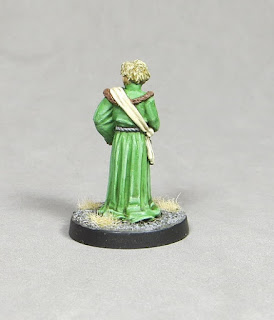 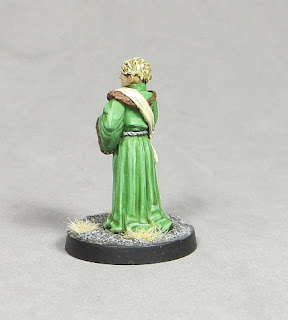 To read back on the 40kthulhu story, check out the previous chapters:
Chapter 1 - The Object in the Bazaar
Chapter 2 - The Sigil in the Undergrowth
Chapter 3 - At the Stars of Madness

A collaborative project between Asslessman, Greenstuff Gretchin and myself.
Posted by axiom at 12:53