The new GW figures are, of course, great. But they're massive, and don't really fit the Rogue Trader aesthetic.
The single sculpt, which later became described in the catalogue pages as an Adeptus Custodes, was one of the very first 14 figures produced for Rogue Trader back in 1987. He was described as an Imperial Bodyguard, and illustrations of him peppered the Rogue Trader rulebook. 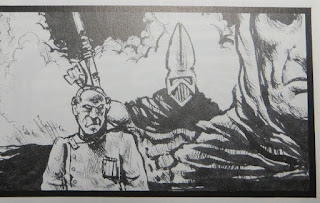 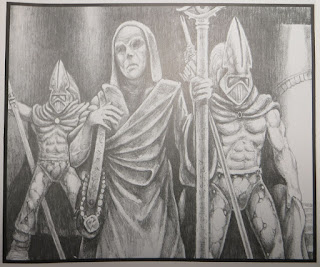 I have painted up a trio of Custodes / bodyguards. Two are clearly unmodified figures, but the third (centre of the pic below) represents a captain of the guard.
﻿ 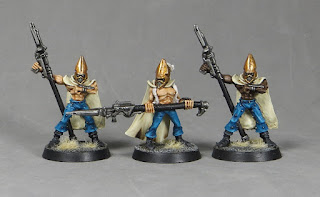 I've painted all three figures in a matching colour scheme to Lord Greiss, my noble / planetary governor. I figured that the looser description of Imperial Bodyguards would allow them to be used as his personal or ceremonial guard. 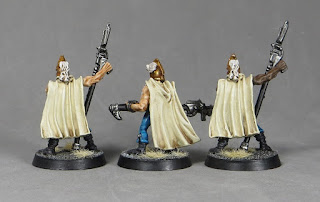 The captain is a conversion from a wood elf boar master of all things. I selected him primarily because he has similar trousers to the original models, as well as the pre-requisite bare chest. It also helps that both figures are Jes Goodwin sculpts, so they have similar build / proportions and crisp sculpted details.
﻿ 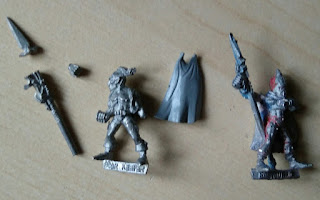 With the selection of a few additional bits, including a plastic high elf cloak and a Grey Knight nemesis force halberd, the basis for the conversion was there. 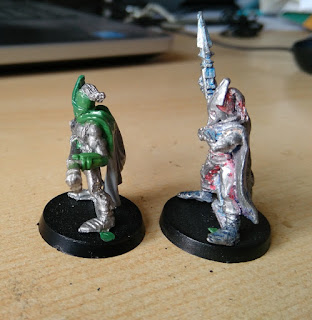 I repositioned the arms, and added the parts of the force halberd, with a new blade at the tip. I sculpted a new left forearm and the top of the cloak to blend it in. 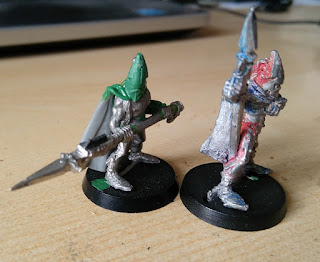 The helmet is largely a greenstuff cast of one of the original bodyguards, with the elf head cut down with some sculpting to blend the different parts of the helmet together. 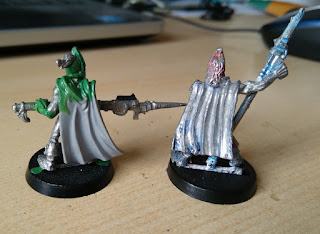 At one point I debated adding the trouser studs to the captain model, but I decided against it - as a captain his gear is slightly different to the guards - he gets a nice fur waistcoat after all!
Posted by axiom at 11:34