Over the last couple of years, ex-GW illustrator has shared many of his fantastic Warhammer and 40k illustrations  over at his Facebook page. I'm a huge fan of Tony's artwork, and am lucky enough to own some of his nice Eldar pieces. One set of illustrations that caught my eye when Tony first posted them, was a series of 5 images of a character called Hyams. From conversation with Tony, the illustrations were commissioned by GW Books (the publishing arm of GW in the late 1980s and early 1990s) to accompany a novel about Hyams - a hive ganger who has a dream that he should travel to Holy Terra. We don't know who the author was, any more details of the storyline, or indeed why the book was never published. All we have are Tony's wonderful illustrations and tantalising titles:﻿

Inspired by Tony's Hyams illustrations, I set about trying to create my own miniature version of the character. Tony was able to give me a few more clues about Hyams.


On Hyams' right arm: "Bionic as I recall. I only had artist's briefs to work from rather than the full text bet seem to recall that he was from a violent hive-world so his arm could have been cobbled together from scavenged tech, probably heavily modified with inbuilt weapons."
On Hyams' clothing: "Camo on sleeve and trousers probably urban colours as he's from a hive world."
Armed with the above images and knowledge, I proceeded to create my miniature Hyams.


The above process took around 18 months, including a significant period around step 3 when I was really unhappy with the progress, and didn't know how to make Hyams' distinctive bionic arm. But I persevered, and finally, have completed my version of Hyams. 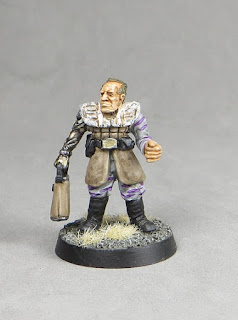 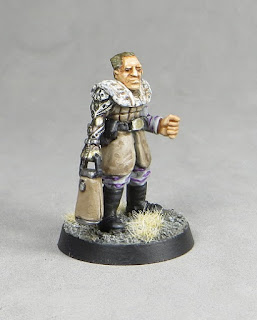 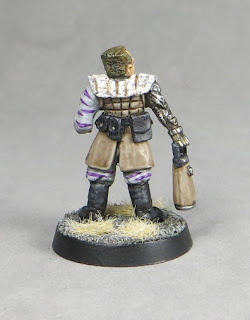 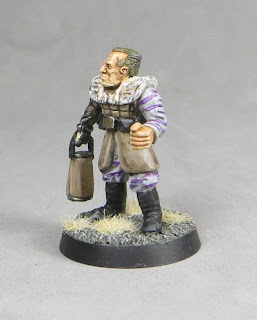 Hopefully the figure evokes the illustrations sufficiently. He's not a 100% accurate recreation, particularly some areas of the face (with his more prominent chin), but he is 'close enough'! I look forward to including Hyams in some of my civilian 40k scenes.

If anyone knows any more about Hyams, and the novel he was due to feature in, I'd love to hear from you!
Posted by axiom at 14:19