One of the pleasures of making my Logan's World Mercenary gang, is that I'm painting up some pretty obscure figures. In fact, I don't believe I've ever seen all 4 Confrontation Maniacs painted before.
If you can't recall what I'm talking about, it's these guys:
I've previously painted up two of the armless guys, and decided it was high time to paint up the third (also my favourite of the three). As with the earlier pair, I've gone for a fairly restrained colour palette - a dun brown, white, dark blue and black.
﻿ 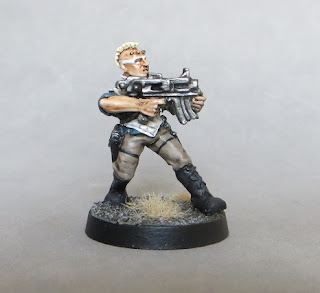 I've used another pair of arms from Victoria Miniatures, spliced with a bolter. I needed to modify the left hand a little by rotating about 90 degrees. You can't really see in the pics, but I sculpted a basic wrist watch to cover the join (it might not be sci-fi, but it's retro). 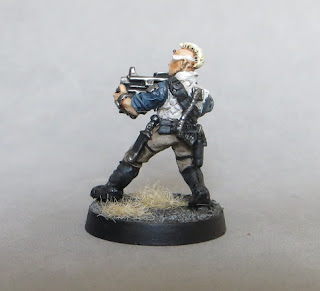 Here's the three Maniacs together - a pretty menacing looking bunch! 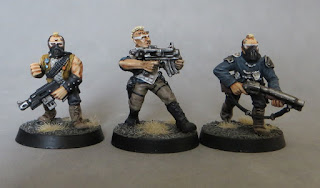 I'm looking forward to painting the Maniac Leader with his AK47 style autogun in the near future.