I like aliens. I want my fringe world setting to be populated by a range of alien travellers, traders, mercenaries and associated scum – those races not accepted by mainstream Imperial society, but at large in the lawless dark corners of the universe. Not unlike Mos Eisley in fact!

Not all aliens fit the 40k aesthetic, but I was recently looking at the Kryomek civilians range, currently in production by MSD Games. The bulk of the figures, sculpted in the early 1990s by Bob Olley, retain a great Rogue Trader vibe. Having purchased a decent selection of the figures, I decided to start with a pair of my favourite cute little aliens to start things off.


The Oranssii xenos race are mammal-like reptilian humanoids. Standing a bulky 2m tall or more, Oranssii have scaled hides, long tailed and clawed feet. They lay eggs, but suckle their young once hatched. The colour of Oranssii hides is most striking – both males and females possess vibrant orange coloured heads, leading the race to often be referred to as “citrus noggins / nogs” or “orange bonces”. Oranssii females have a dull brown and lightly mottled hide, whereas the males sport vibrant blue-green scales across their entire body. Darker and more intensely coloured males are considered to be more successful, dominant and desirable by females.
Ky-lisko and Azk-lisko are Oranssii siblings, hatched from the same brood. The brother and sister are currently in the employ of Abdul Goldberg. They have travelled widely in human space, plying their trade as smugglers and guns for hire. While Azk-lisko is the more powerfully built and martial of the siblings, his sister is a much more canny operator. Ky-lisko is a competent conversationalist in Imperial Gothic and a shrewd negotiator. She has an eye for a beneficial deal, a nose for danger, and is ably supported by her less sharp brother. 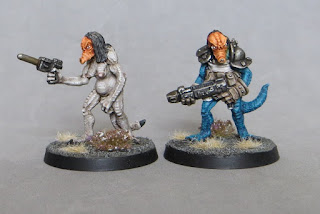 This pair of aliens come from packs Aliens with Bolters 1 and Aliens with Bolters 2, alongside another 4 aliens I will get to at a later point. The figures are clearly based on the same underlying sculpt – an approach which was very typical for the time. Bob obviously started with the naked female sculpt, then added rather more clothing and armour to create the second variant.
I wanted to make it apparent that this pair were of the same species, but also to ensure that they looked quite different. I googled some images of reptiles with different colours for the sexes, and hit upon the striking red headed rock agama lizard. I liked the way that the orange heads clearly made them the same species, while the body colour was so different. 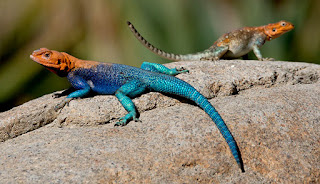 Painting the pair was pretty straightforward. Ky-lisko got a dappled dun colour hide and the orange head. The dun colour was GW Rakarth flesh, washed with some browns and then highlighted by adding GW Pallid Wych Flesh. I gave the head a couple of sepia washes, before hitting it with an orange glaze to deepen the colour. 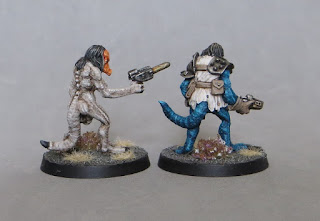 With Azk-lisko, I repeated the orange head. The hide was pretty much exactly the same approach as for Ky-lisko, but with a Scaly Green base and blue washes.

Overall I'm pretty happy with the results, and I think I have a nice looking pair of alien mercenaries to use!
Posted by axiom at 16:44