Next off the painting table are two new additions to the Pan Tang warband I'm putting together for Frostgrave. The background to the warband is that they are set some decades prior to Elric meeting Theleb K'aarna. Theleb is apprenticed to his uncle, a powerful Sorcerer called Soorkan ul-K'aarna.
Having already painted up Soorkan, plus a selection of henchmen, I decided it was time to paint the apprentice - Theleb K'aarna himself. I simultaneously painted up another of the warband in the form of a Pan Tang warrior:﻿


Theleb K'aarna is the unmodified Citadel version of the character, produced as part of their 'Melnibonean Personalities' range. Theleb has blue robes to match his master, overlain by a white tunic, green sash and sheepskin jacket.
﻿ 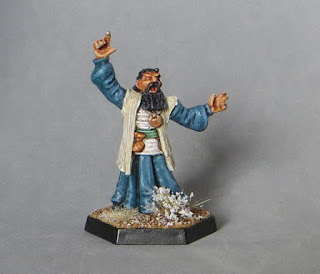 I must admit, I didn't enjoy painting all the layers of detail on Theleb, not to mention that my copy of the figure was pretty badly miscast on the upper arms, which necessitated a lot of filing and scraping to try and hide the ugly misalignment. I think he fits the bill as the apprentice at the end of the day though, being rather less opulent than his master. 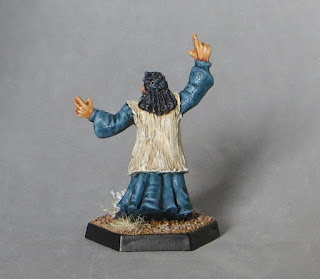 The second new addition is one of the Pan Tangian Infantry, also from the Citadel Eternal Champion range. By and large he was a much simpler figure to paint, and I enjoyed painting the relatively chunky details.
﻿ 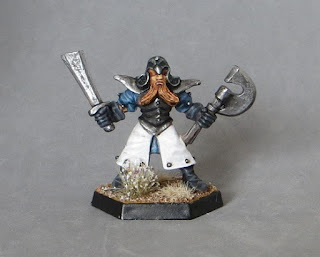 Although the Pan Tangians have a vaguely middle-eastern appearance, I decided to paint the model's beard orange as a visual nod to the sort of dying seen in some contemporary cultures (like the gentleman below): 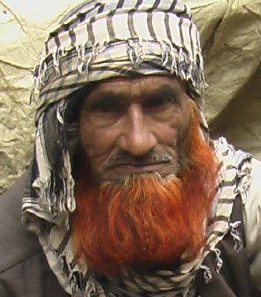 In Frostgrave terms, this guy will be representing a thug, although he could go on to be a treasure hunter or perhaps something else. 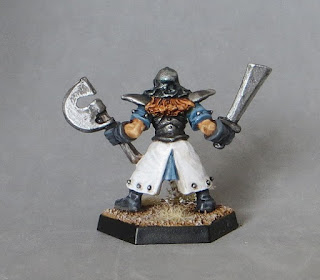 The addition of this pair takes my Frostgrave warband up to seven models strong, with another three to add to complete the starting line-up.