I've painted two pretty much unrelated figures over the past week. The only thing they really have in common is that they're needed for future games: a new Eldar figure for my Inquisimunda campaign, and a companion model for my 'Space Riders' RPG character.

Fishdog
'What on earth is Space Riders?', I hear you ask. It's a Rogue Trader themed RPG I'm currently involved playing online with a group of gaming buddies. My character is Fim, a rather moribund Piscean Warrior. We'll be playing a physical game of RT in a few months time, and need to represent each character, plus a companion, on the table. Happily, I painted up one of Obscure Creator's fishmen about 18 months ago, so I just needed to source and paint a suitable companion. 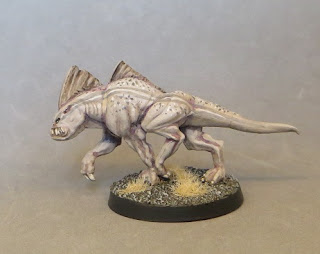 I've had a swamp hound model from Four A Miniatures sitting in a box for ages, for just this very purpose. I gave him a very quick paint job using a neutral skin colour to contrast with the more brightly coloured Fim. 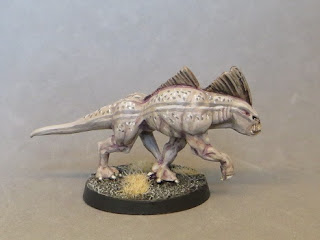 As a bit of interest, I painted some markings, loosely based on eels, along the length of each side of the fishdog's body. I hope Fim's mental state will be improved by having a loving animal companion to boost his mood!

Elfman
Lul the Younger is one of my Eldar Void Pirate band. He started out as a newly recruited bosun a few weeks back, armed with nothing but a simple lasgun. But the Pirates have accumulated some wealth and have splashed out some cash on new weaponry, including a fusion gun, now wielded by Lul. 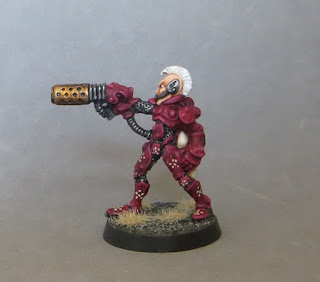 In order to represent the newly equipped Lul on the table, I needed to discard the model I had been using, and replace him with a more suitably armed figure. I pulled out the Captain Aetolia Lightfoot figure (later more simply described as Eldar Guardian with 'meltagun'), and gave him a quick paint job. 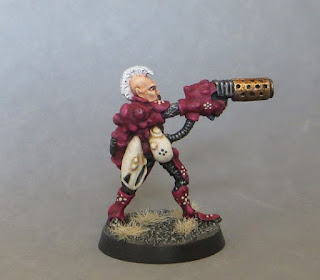 Speed being the essence for this figure, due to a tight timeframe, his paint scheme is rather basic - a dark red set of mesh armour, with a cream helmet. The only concession to detail is the addition of the 'flowers' over his armour, picking up again on the Japanese style I've used on other members of the band. The 'flowers' are just simple cream dots, some of them not executed particularly well, but I think it just about passes muster.