﻿
With the ongoing development of my Eldar Void Pirates warband in my current Inquisimunda campaign, I needed a new recruit. I fancied making a character which had a bit of a Eldar Scout / Ranger vibe, but wanted the figure to tie in with some of the styling of the Rogue Trader Space Elves.
I delved around in my bits box and sourced a spare Space Elf and a gun-less Eldar scout from a previous conversion. I quickly mocked up the below concept:﻿ 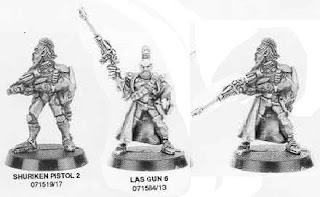 Satisfied that the conversion would do the job, I set about the two figures with my saw, making sure to avoid damage to the slung helmet and laspistol hanging from the left shoulder. I replaced the shuriken weapon with a plastic Eldar lasgun, and added the scope from a modern plastic Dire Avenger. Then it was a case of covering the joins and repairing any damage with greenstuff. 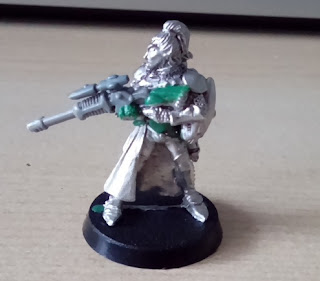 It had been suggested that I needed to add a predominantly blue Eldar to my warband, so this new addition got a dark midnight-blue colour scheme, accessorised with white and pink.
Merne Darkbrow is one of Prince Nuadha's most trusted scouts. His midnight-blue armour, and cameleoline-coated robe allow him to fade into shadows at a whim.
﻿ 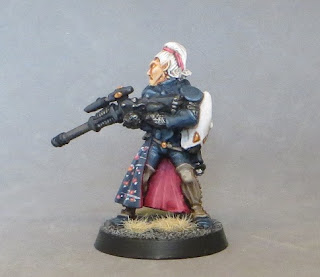 I had finished painting the figure with a plain blue coat / robe, but after a discussion with cheetor about kimonos, I decided to push myself and add a kimono style pattern. I did a Google search and rather liked this pattern below: 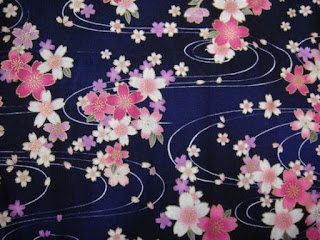 I made an approximation of the pattern with some white swirls, then added pink and white dots. I think the result does enough to deceive the eye. 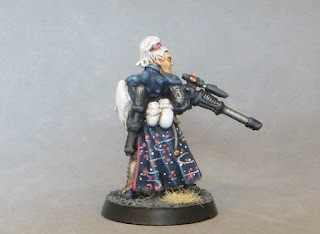 Merne will make his in-game debut tonight against a ravening band of Dark Eldar. Hopefully he won't suffer the usual fate of newly-painted figures, and will avoid dying horribly and ineffectually!