'What's this all got to do with genetically engineered super troopers?' I hear you ask. Well, it just so happens that with the demise of Gron-Slom, I had the opportunity to replace him with a more effective inclusion to Dirske's warband. As I had plenty of Throne Geld in my kitty, and the need for some more high-powered weaponry, I decided to invest in something with a bit more punch. A heavy plasma gun ought to do it!

After rattling around in my boxes for a suitable figure to use, I decided on a model of Rogue Trooper from Citadel's old 2000AD line. Rogue is toting a lazooka, which I figured could pass muster as a heavy plasma gun ('plaszooka'?). 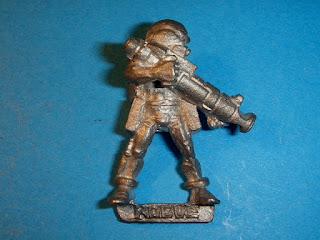 Whilst the pose was great, I didn't really want my figure to have the same characteristic skin-tight leggings as sported by Rogue, so I got out my greenstuff and bulked them out into a pair of baggy trousers. I also teched up the figure a little, by adding a small aerial to the backpack, and a little sighting doo-dad to the side of his helmet. 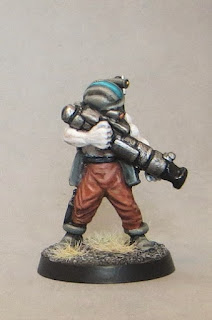 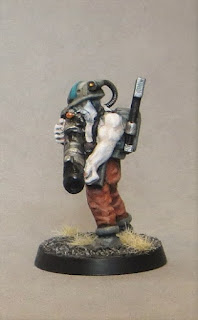 The colour scheme follows the now standard palette for Dirke's retinue - grey with a rusty brown and flashes of a jade green. I wanted to make a nod towards Rogue's genetically engineered origins - happily in Warhammer 40k canon, there's a very similar concept with the Afriel strain Imperial Guard regiments. 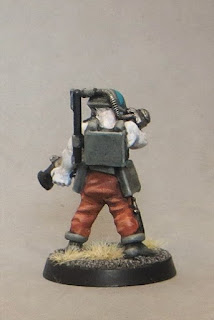 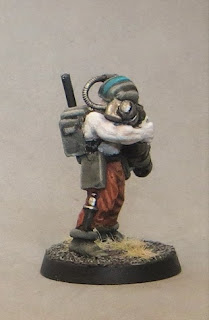 The Afriel strain are, like Rogue, genetically engineered super troopers, characterised by albinism. They also are supposedly plagued by bad luck and misfortune...this seemed perfect for the kind of soldier who might end up joining Dirske. A simple pale skin colour, and Afriel Trooper Alpha-6 is ready for his first game (during which he will certainly fail to do anything of note)!