The terrifying power of the administration

﻿
I have always loved the character of the Rogue Trader adventurers range, and I really enjoy looking for suitable non-comms and civilians to populate my collection.
I was very much excited when it emerged at BOYL'15 that Foundry had put a set of old unreleased Citadel Rogue Trader figures into production. I immediately snaffled some on the day. If you want to get hold of a set yourself, you need look no further than the Foundry website!
My favourite conceptually from the set is the scribe / member of the Adeptus Administratum. If you follow the Eldritch Epistles blog, you'll be aware that the figure is a very close match to one of the illustrations from the Rogue Trader blog.
Unfortunately, the pose on the sculpt is rather oddly disco, with its pointing finger and toe-tapping lead foot. That's not to say you can't make a very nice job of the paint and end up with a good looking figure (see Sho3box and Leadplague). I just wanted to make mine a little less obtrusive: 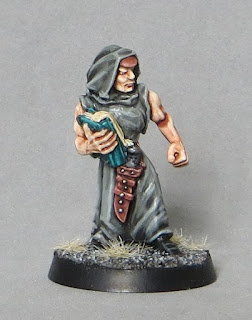 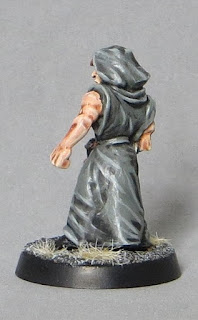 In order to change the pose from a dominating / commanding one, into something more subservient, I removed the over-muscular left arm and it's sausage finger, and replaced it with a plastic arm from the old Confrontation gangers.
﻿ 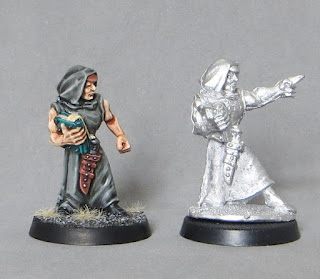 I hacked away at the extended left leg, glued the foot to the base in a less extended position, and sculpted a new robe closer to the body. 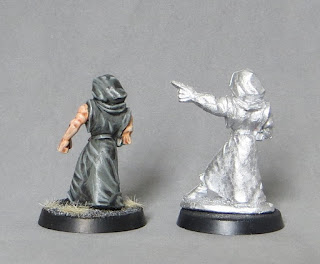 It's not the best conversion I've ever done, but I think it meets the brief. It also means I can paint up a second and they will be distinct characters rather than pointing clones doing their early morning callisthenics!