My approach to painting all of these figures was quite different to my usual method of individually painting each figure - I knew I simply couldn't afford to spend 3-4 hours per figure, so instead opted for a quick and basic system.

I split the figures into roughly 3 batches and sprayed them different base colours (yellow, brown and a dark blue/green). Then I systematically took a batch and attacked it over the course of the evening, painting all the flesh, then randomising some details a colour at a time (brown jacket on fig 1, brown trousers on fig 2, brown gloves on fig 3; red hat on fig 4, red jacket on fig 5 etc. etc). All the colours were then given a wash to add depth, then any details (stripes, dots and so on) were added before basing. 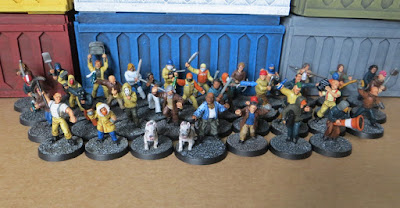 This batch painting approach enabled me to paint 12-14 figures in a single 3 hour sitting from the spray base coat. The figures certainly aren't high quality paint jobs, but they will be perfectly acceptable in the context of a game based on Space Hulk where there is a high turnover of placement and removal.


I'll leave you with a final shot of the masses, ready to take on the hired guns, bodyguards and gangs in a few weeks time. 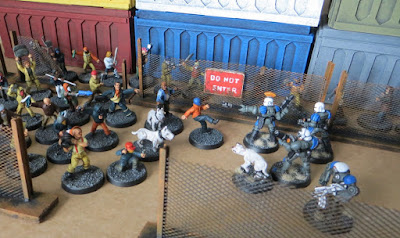