We ended up playing 3 scenarios from the Necromunda rulebook.
Game 1 - Gang Fight
Several months of covert investigation have indicated that the Brotherhood of the Church of Evolution may not be quite as they seem. Inquisitor Dirske has requisitioned a small escort of Adeptus Arbites to make a show of force and attempt to reveal the Brotherhood for what they truly are. Warily entering the Brotherhood's territory, Dirske spots familiar symbols - a four-armed creature; a viscious fanged alien eating it's own tail. Catal sings out ahead, "Look, movement!". Glancing into the gloom, Dirske spots the hunched figure scuttling away, a claw mounted high on it's shoulder.
Inquisitor Dirske's forces make a good inroad into the underhive, sending some Arbites to high vantage points, while pushing forward in force at ground level.
﻿

Some early successes knock down the numbers of the Brood Brothers. Felix Catal's hand flamer is used to great effect. Unfortunately, Dirske had underestimated the strength of Magus Bal-Ondar's mind control ability. Arbite Iasa simply dropped his grenade launcher and walked into charge range of the purestrain genestealer, where he was ripped to pieces without lifting a finger to save himself.

At this point, Dirske decided a hasty retreat would be in order, and pulls his forces from the fight.

Game 2 - Rescue
The presence of a genestealer cult has been proven. Is it yet too soon to seek Imperial support? How deep has the infection spread? Several days later, Inquisitor Dirske hears that the Brotherhood has not been idle in the intervening period. They have snatched a high-ranking Imperial official. Dirske's informant states that the official has been temporarily left in a lightly guarded location - this might be the last chance to rescue him before the cult enact their plan. 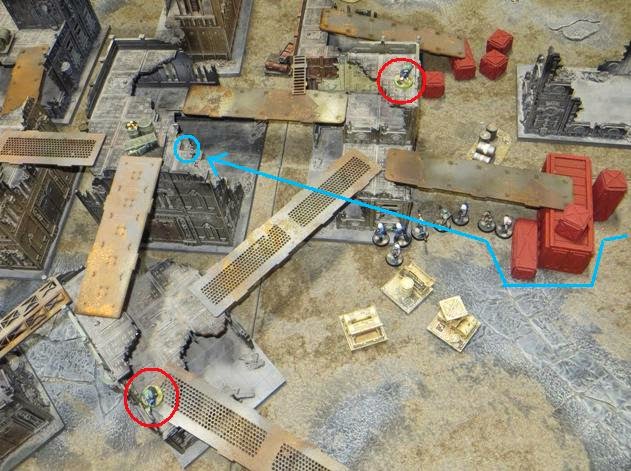 The Arbites manage to free the captured PDF Commander. Dirske and his team are fully half-way to safety before the Brood Brothers raise the alarm.


Game 3 - Scavangers
Dirske and his surviving companions ran headlong into the maze of a manufactorum area. The true strength of the cult was revealed - as they fled the failed rescue attempt, it was apparent that massed hordes were readying to overthrow the planetary government. Already Dirske was receiving reports of large-scale fighting, and destruction of transmitting stations. In desperation, Dirske realised that he needed to find a low-frequency transmittor and booster, in order to get a message off-world. An Imperial surplus store was only a few miles away - that would be the best chance of obtaining the equipment...if only he could get there first.

In the final game, Graham and I swapped forces. We placed three loot counters on the board, with the winner needing to remove them to their table edge. Speed and access proved decisive - we were each able to snatch a counter early on, but the third counter was on a high building, which Dirske and his Arbites had no obvious route to, whereas the Brood Brothers were able to walk in and walk out, virtually unopposed. In a vain attempt to claim the vital transmittor unit, Dirske and his Arbites recklessly ran down a narrow alley. The massed Brood Brothers fired down on them from the rooftops, like shooting fish in a barrel. Magus Bal-Ondar added to the confusion by siezing control of Arbite Hinde's mind. The willing puppet simply turned on the spot and executed Arbite Sergeant Raul at point blank range.

Felix Catal had run, dragging Dirske's body behind him. The sanctuary of the Arbite Courthouse was temporary - the planet was lost. The cult was unstoppable.
Posted by axiom at 09:50