I had arrived with some Zoats and a random selection of humans from my cases. Because looting is fun, I decided to put down the piratical crew, led by a space pimp with a cane (otherwise known as one of my Brat gang).﻿


A couple of turns in, it was beginning to dawn on myself and Scalene, that bringing standard humans, armed with lasguns and autoguns (and in my case, only equipped with flak armour), was A BAD IDEA. Frag missiles, lascannon shots and heavy bolter rounds were chewing through the poor humans with ease. While in return, Scalene's single missile launcher kept missing, and his autocannon hit nothing before being vapourised!


Phil (Skarsnik and Old Lead) turned up and added a squad of Terminators to the Imperial ranks. Shortly afterwards my Zoats reinforced 'Riot'. 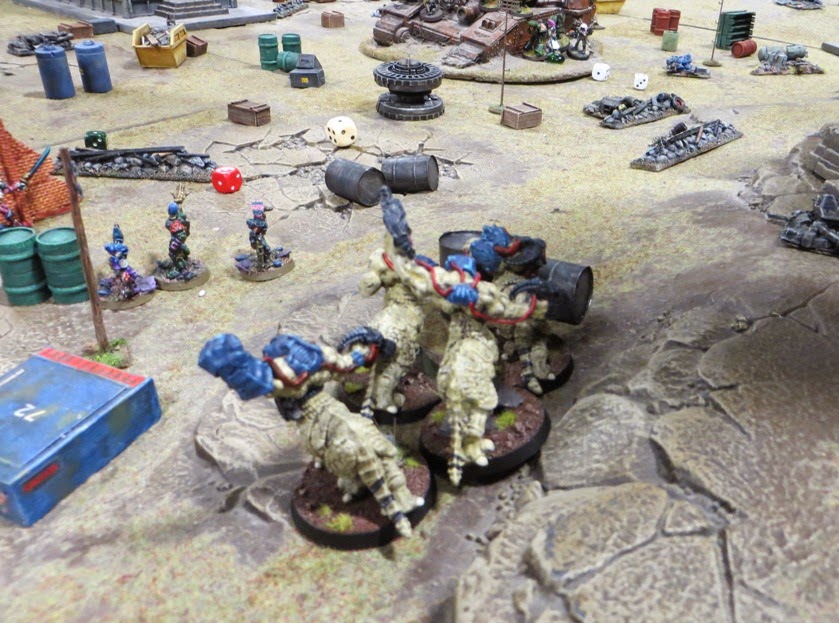 Late on in the game, Scalene's humans took out the Space Marine devastators (courtesy of haywire missiles), as well as the Terminators (meltaguns and shuriken pistol). Scalene Junior finished off the Squats, but lost the last of his Zoats. A final wave of reinforcements saw Matt arrive at the table with a squad of Eldar, while Scalene Junior was given charge of some Beastment with jump packs. Chris (Curis) arrived with Imperial Guard, while some new Squat units turned up for the Imperials.

Come the end of the battle, it turned out that the Imperials had successfully held the Baneblade early on and then at the death, inspite of a dogged assault by Riot mid-way through. The final tally was 5 points to the Imperials and 3 to Riot, meaning the looters had come away without any valuables, and been mauled in the process!

Rogue Trader learning points
It had been over 20 years since I last played a game of Rogue Trader...some of the things I had assumed stayed pretty constant between the editions hadn't. For the next game I will be making sure that:

So - thanks to all the N.O.G.G.ers who played yesterday evening. It was great to see so much old lead on a table!
Posted by axiom at 14:54