Dark Elves at the NAF Championship 2014

The weekend just gone (17/18 May) was a beautifully sunny one. Perfect for picnics, days out and paddling pools. That's what my wife did with our kids anyway. I spent the weekend indoors rolling dice and pushing little men around a green board! That's right - actual real life gaming - a whole weekend of it!

Last year I started building a Dark Elf Blood Bowl team with the intention of going to the NAF Championship 2014; pretty much the largest Blood Bowl tournament in the world. In January I managed to persuade my mate Dan to come along with a team, so we duly bought tickets and then I broke the news to my wife.

Come the day of the weekend of the tournament, I had put the finishing touches to my team and the display base, and was ready to go. Here's what my finished team looked like: 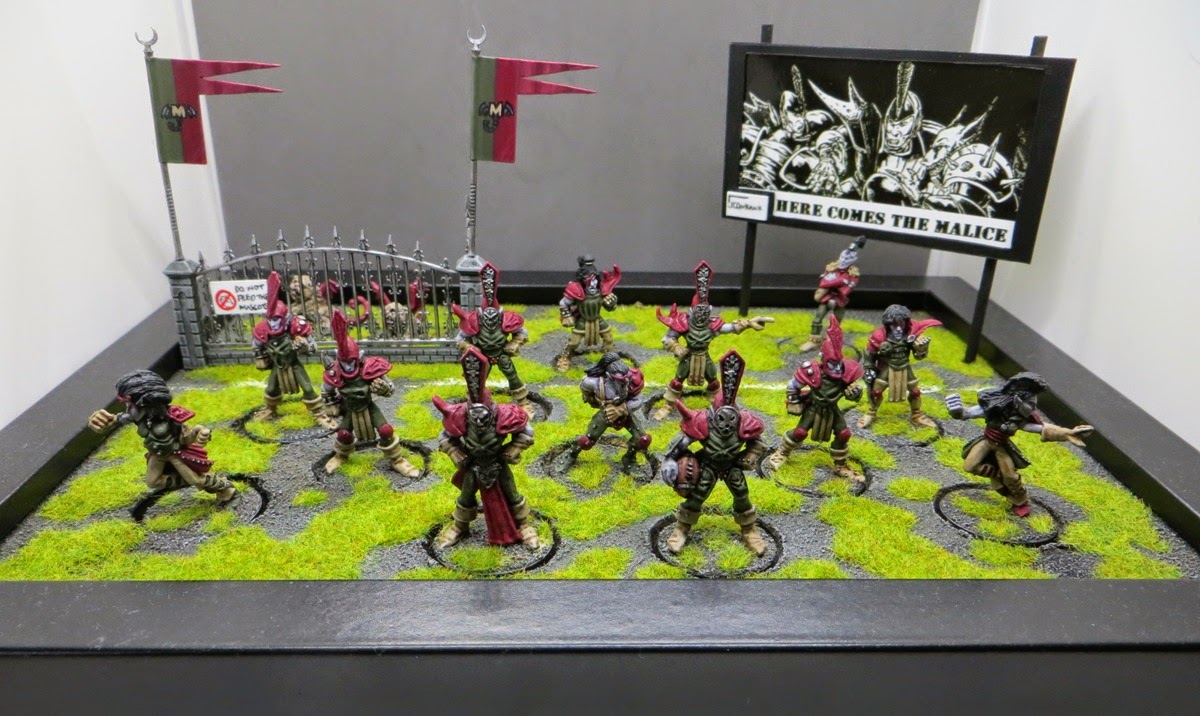 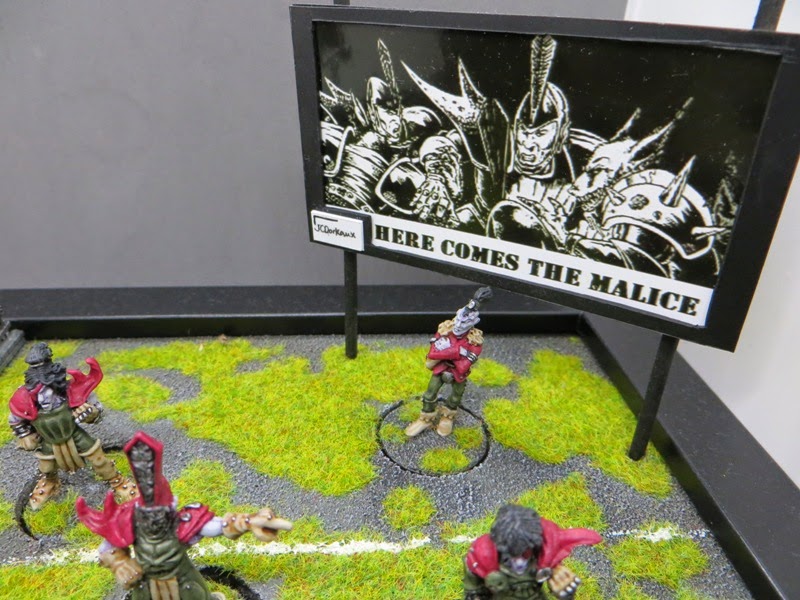 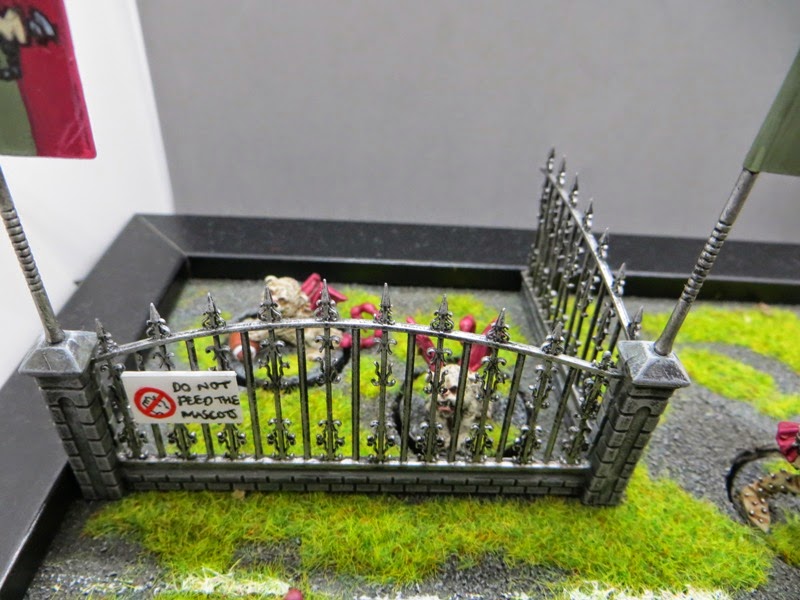 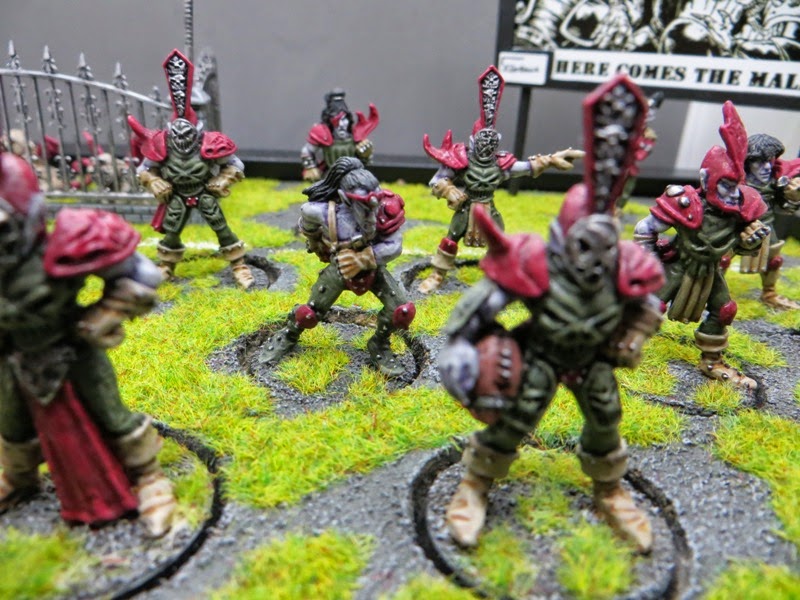 Registration was quick and simple, I also put out my small stand of miniatures for sale (Beast Face Miniatures) to some gratifying interest! It was also pretty amazing to see 160 other Blood Bowlers all in one room.

Game 1 v KFGoed (Undead). TD 0-1, Cas 1-0
My first game up was against the 2012 champion from Denmark, and I was happy to end up with a 0-1 loss whilst incurring no casualties and causing one on him. He kicked to me first turn, managed a last-ditch turnover to stop me scoring in turn 6 and it was 0-0 at half-time. He managed to cage very well in the second half and controlled a late score for his win.

Game 2 v Verbal_HM (Wood Elves). TD 2-2, Cas 2-1
This was a pretty intense back and forward match, with both Wood Elves and Dark Elves having the speed and agility to score quickly. We got to my turn 13 with me 1-2 down and half an hour remaining. Thankfully I managed to equalise in my last turn and get the 2-2 draw (as well as the moral victory by causing more casualties!). 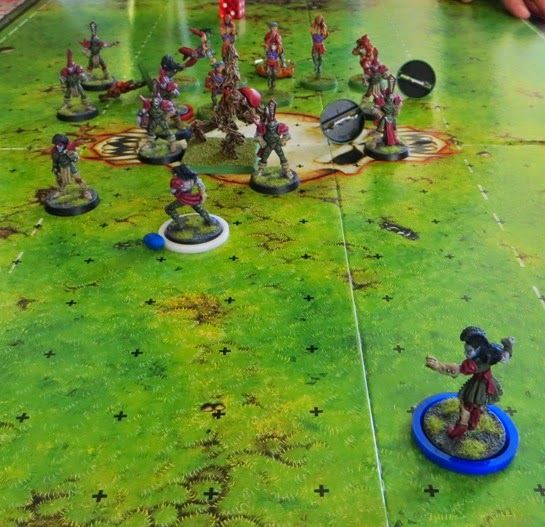 Game 3 v Pedda (Necromantic Undead). TD 1-2, Cas 3-1
Pedda had come over from the Netherlands for the tournament; this game was pretty much lost in his first turn - he stunned 1 player, KO'd 2 and killed a Blitzer. I never really got back in it, but managed a 1-2 loss. 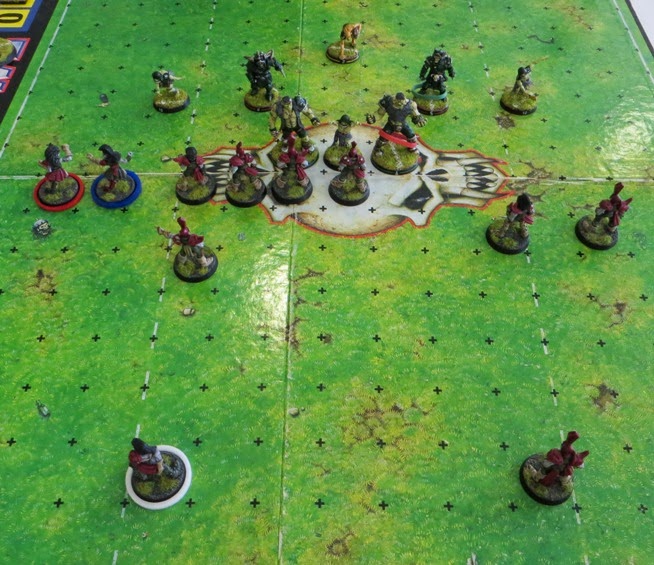 So at the end of day one I had 2 losses and a draw to show for it. Dan had started well with a win against Chaos Dwarfs, but then suffered 2 losses. We nursed our bruises and had a good night's sleep before entering the fray on day 2.

Game 4 v purdindas (Wood Elves). TD 2-2, Cas 2-0
My favourite game of the entire weekend. It helps that purdindas and I have played previously and have a similar relaxed way of playing. The game was real back and forth stuff - we both scored in the first half, then I caged up and scored in my turn 16 to make it 2-1. He had his last turn and went for a one-turn TD to equalise! This is only possible with really fast players, careful positioning, and a lot of luck. I calaculated that purdindas needed a chain of 14 successful dice rolls at varying probabilities of success, with an overall 3.66% chance of resulting in the equalising score. Needless to say, he pulled off every single roll and scored - it was pretty amazing to watch it happen!

Game 5 v Jonas (Goblins). TD 1-0, Cas 2-2
Jonas was over from Germany and had been having a pretty poor weekend. He got me to kick to him and his very first action was a failed block (triple skulls if you're familiar with Blood Bowl dice) with a Goblin Fanatic Star Player, causing a turnover. I smashed through his goblins, blitzed and killed a chainsaw wielding looney, and put pressure on his 3 goblins covering the ball at the back. They failed the pick up, I ran through and scored (meaning all his nasty Goblin secret weapons got sent off). In the second half, I managed to mess up picking up the ball, allowing those little Goblins to run down field, threatening to score. Midway through the half, I realised he was playing for a draw (I guess to avoid the risk of me scoring quickly at the death). Sadly for him, on his penultimate turn, one of his Goblins failed a dodge roll and fell over, meaning my Witch Elf could dodge into 2 tackle zones on the ball carrier. I made the dice rolls, knocked the Goblin down and the ball went loose. With my remaining players I was able to surround the ball and prevent any chance of the Goblins regaining the ball. To my relief, I had ground out the win! 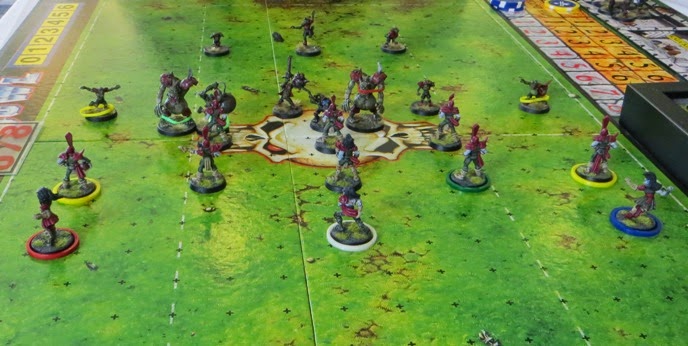 Game 6 v The_Doc (Wood Elves). TD 1-1, Cas ?-?
My final game of the weekend was yet another Wood Elf match up. This was the game that really got away. I managed to turnover the ball in the first half and closed on the Wood Elf line. A last ditch leaping blitz with a Wood Elf Wardancer saw the ball going off the pitch. The resulting throw in ended up with the ball going well down field where it was picked up by a Wood Elf Catcher for a score. I managed to equalise just before half time, after taking out 5 of his players (including injured and KO'd wardancers). In my penultimate turn I broke several players downfield to try and engineer a last gasp score. On my final turn it was all set up - I just needed to run and successfully pass the ball to a Witch Elf standing in the end zone.  My Runner handed off to my Blitzer, who legged it downfield for a quick pass to the Witch Elf. A successful pass meant that I just needed to catch the ball on a 2+. And promptly rolled a 1! I swore a bit. 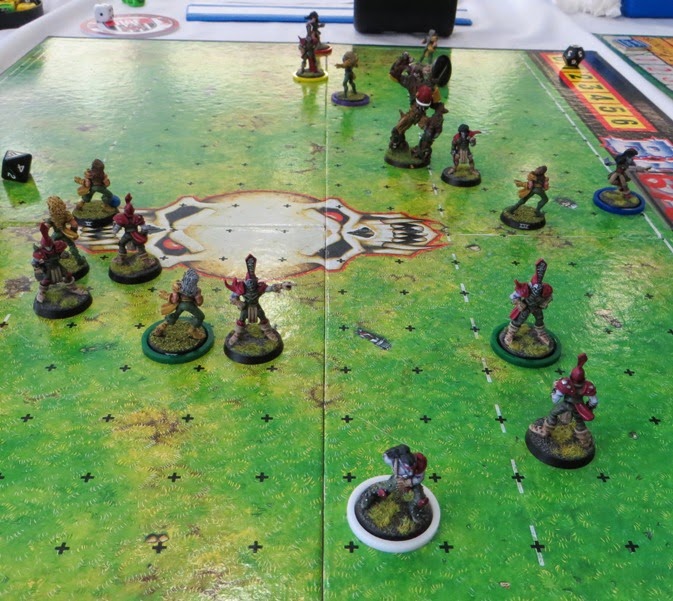 In the final balance, I ended up with 1 win, 3 draws and 2 losses. My best result from the 3 years I've attended. My overall placing was 100/160 - not bad for someone who usually only plays ~10 games of Blood Bowl a year!

Oh, in case you're wondering, my duel entry (below), didn't win the competition. 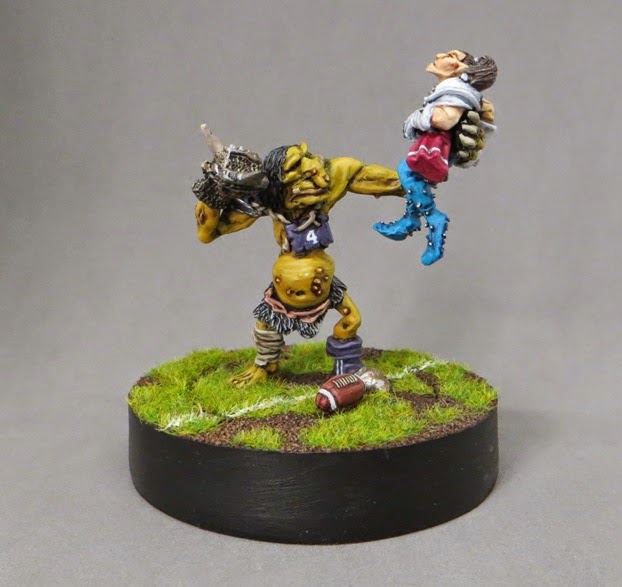 The winning entry was this fine piece of work by Nazgob, entitled 'Dodge This': Personally, I think my conversion work is better, but his entry wins on dynamism, comedy and excellent painting, so I can't have too many complaints! The other duel entries are below: 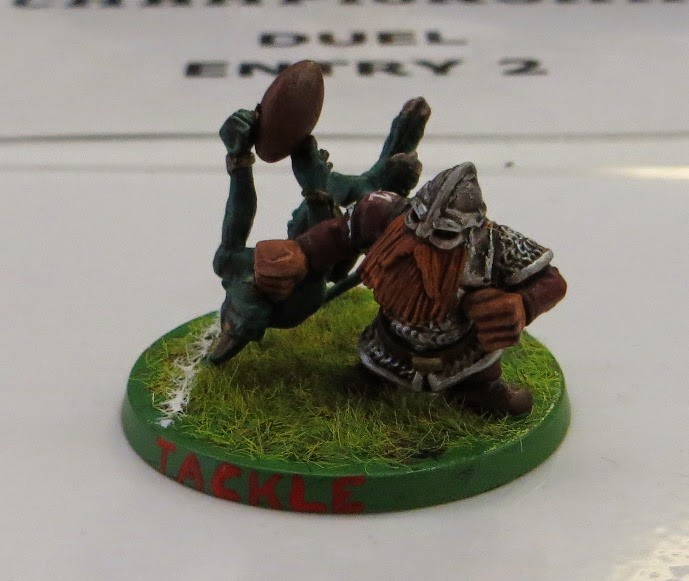 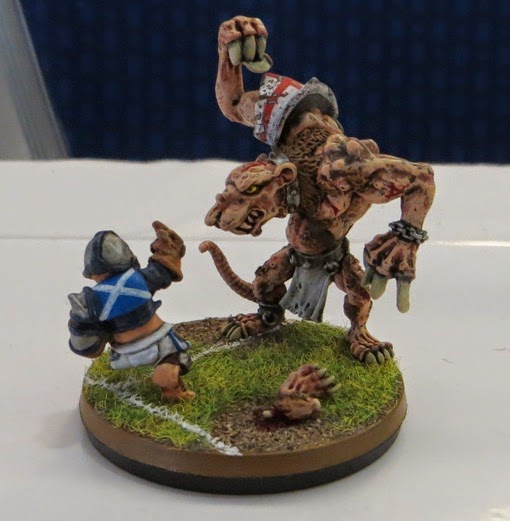 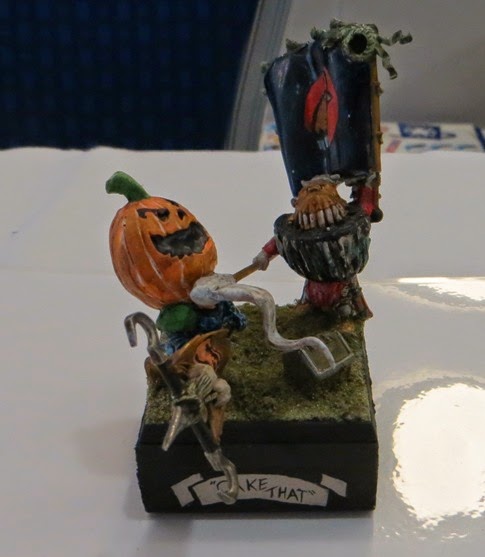 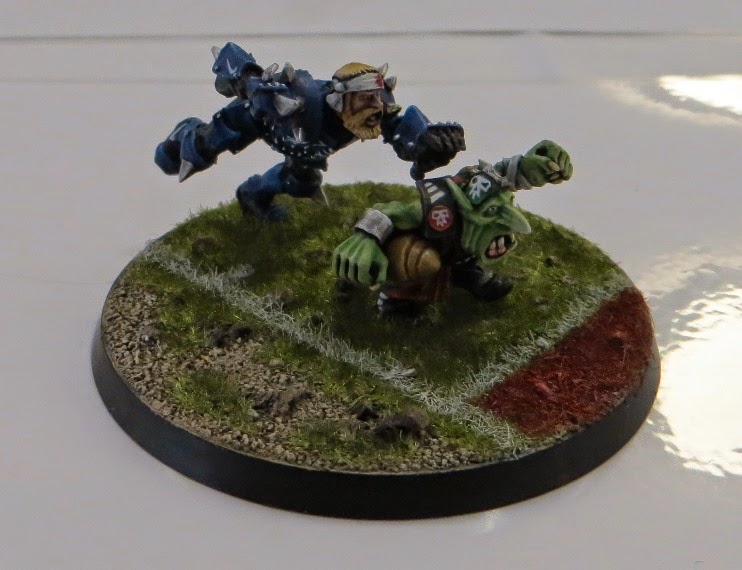 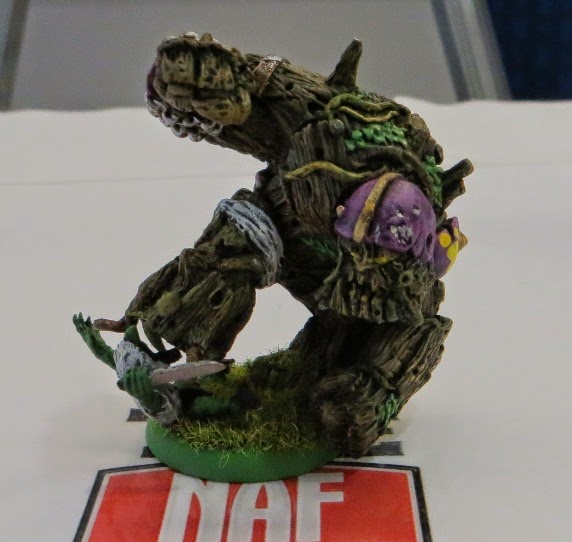 Phew - think that's enough about Blood Bowl. I'll sign off just with a suggestion, that if you like playing Blood Bowl, there's worse ways of spending a weekend that at the NAF Chmapionship - why not come along next year?!﻿